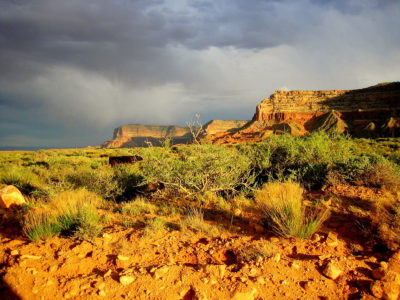 A Canadian mining company has purchased property that was formerly part of the Grand Staircase-Escalante National Monument. With the Trump administration’s rollback of federally protected lands last year, this area is now going to be stripped and destroyed for a profit.

Grand Staircase-Escalante National Monument was dedicated in 1996 by President Bill Clinton. It encompassed 1.9 million acres southeast of Boulder, Utah and was previously America’s largest national monument. In December of 2017, the Trump administration committed the largest reversal of federal land protection, reducing the area of the Grand Staircase-Escalante National Monument by almost half, to about one million acres. This means that the former federal protections will no longer prevent mining and development; what was once a pristine landscape could now be gone forever.

Conservation organizations currently suing the Trump administration maintain that only Congress has the authority to revoke or modify national monument status. This means that President Trump’s action in reducing the federally protected area of the affected national monuments was illegal and the 200 acres of the Colt Mesa sold to Vancouver-based mining company, Glacier Lake Resources, Inc., was not Trump’s to sell. This land should not be available for commercial development, which would destroy the beauty and environmental treasure that is Grand Staircase-Escalante National Monument. Sign the petition to encourage this mining company to show some restraint in favor of environmental protection and stop efforts to mine this land which, even if not in name, is still a national treasure.

Your company’s proposed development of land formerly included in Grand Staircase-Escalante National Monument is deplorable. Glacier Lake Resources should not be mining this area. Even if the federal protections have been revoked in name, and even this is debatably legal, the Colt Mesa is still considered a national treasure.

Under the Antiquities Act, Congress delegated authority for the establishment of national monuments to the president. However, Congress maintained the authority to revoke or modify these federal protections. President Trump sold you something that wasn’t his to give. Proponents of these rollbacks might tell you that his power in revoking protection is implicit in this regulation. I for one am not comfortable staking a claim, literally or figuratively, based on implicit power.

This “welcome addition” to your portfolio is a pristine landscape and a national treasure. It is not too late to prevent development of this important landmark. Stop your company’s assault on our environment and do not mine Grand Staircase-Escalante National Monument.