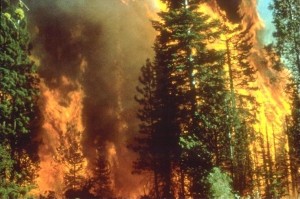 Goal: Save the lands and the inhabitants devastated by California wildfires.

Recent wildfires in California have destroyed neighborhoods, claimed at least eight lives, and ravaged lands that include parts of one of America’s most popular national parks. As the 17-and-counting wildfires continue to leave destruction in their wake, America’s federal government remains largely silent. California’s governor recently issued a plea for critical aid from the Trump administration, yet so far these pleas have been ignored.

Perhaps the most dangerous of the many blazes has already seared forests and surrounding neighborhoods that cover an expanse five times as big as nearby San Francisco. Efforts to contain these unforgiving fires are hindered by soaring temperatures, high winds, and low-humidity conditions. This catastrophic blend has meant only one-quarter containment in the most challenged regions.

The devastating impacts will likely linger long after the last fire is extinguished. Just as with the human tragedies, plants and wildlife will be lost forever. Native plants battered by unrelenting fires may never make a truly full recovery, and could even be supplanted by invasive plants. Worse still, the vulnerable wildlife that rely on this vegetation for sustenance will suffer in the long term as well. Diminished air and water quality will only compound these risks.

Two weeks: over 1,000 homes, eight lives (including four firefighters), hundreds of square miles…all obliterated by California’s 17 raging wildfires. In this past weekend alone, the amount of acres claimed by these disasters grew by the thousands—one blaze even creating a ‘fire tornado.’

As California’s citizens—American citizens—continue to flee their homes, pick up the pieces of their shattered lives, and attend another funeral for another fallen hero, show the country you care about its precious lands and all its precious life.