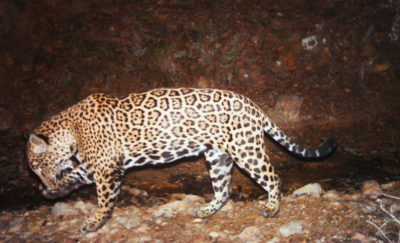 Goal: Increase monitoring and protections for threatened jaguar populations in the border regions of Arizona.

A photo of a pelt believed to belong to a rare jaguar known to roam the mountains of southern Arizona has been discovered, leaving wildlife experts fearful that the few remaining jaguars in the region may be at risk due to illegal hunting. These threatened big cats once roamed throughout the desert southwest, yet thanks to hunters and ranchers, their numbers have been reduced to a mere handful of transients who wander the rugged border region between Arizona and Mexico. We must demand greater protections for this species and increased monitoring to prevent further loss of life.

Researchers tracking the elusive cats say the pelt in the photo belonged to a young male cat named Yo’oko. Because each jaguar has unique markings, similar to a fingerprint, it is possible to link the spotted coat to a specific individual with a high degree of certainty. If the scientists’ suspicions are confirmed, the already shaky future of jaguars in the American southwest may be at furhter risk.

In order to stop hunters from targeting these beautiful apex predators, the Arizona Game and Fish Department must do more to enforce existing protections and jaguar monitoring. These rare creatures must be allowed to roam in their native habitat once more. Sign this petition to demand that officials take this unnecessary killing seriously.

Hunters are believed to have killed one of the few remaining jaguars known to inhabit parts of southern Arizona. A pelt believed to belong to a young male, known to researchers as Yo’oko, was recently photographed, which raises suspicions that this big cat was killed as a hunting trophy for his valuable spotted coat. These sorts of killings are illegal and wasteful, and they must be brought to an end.

We demand that you increase monitoring for illegal hunting in the region and call for more stringent protections for this threatened species. Jaguars play a necessary role as apex predators in the Huachuca Mountains ecosystem and must be allowed to recover and thrive. Please do what you can to protect and monitor this unique species so that they have a chance to survive in the United States. 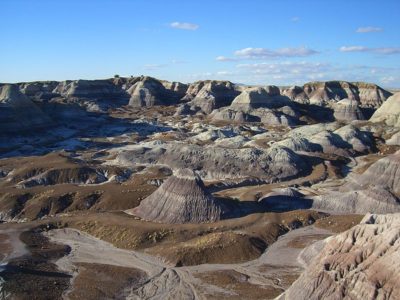 Goal: Abandon plans to lease over 4,200 acres of land near a national park to oil and natural gas companies.

A beautiful national park in Arizona may soon be facing dangerous destruction at the hands of fracking. President Donald Trump has proposed auctioning off 4,200 acres of natural land for oil and gas fracking. The very little untouched natural world our country has left should be protected, not destroyed.

This proposed 4,200 acres of land is adjacent to the Little Colorado River and Petrified Forest National Park. The river is home to valuable groundwater that could be polluted, as well as endangered fish. Human and animal life is in danger.

Action must be taken now to protect our country’s endangered species and the habitats they call home. Sign the petition to demand Trump’s proposal be abandoned.

About 4,200 acres of beautiful habitat in Arizona are for sale to the highest bidder. A lush river and beautiful petrified forest will be destroyed if fracking comes within miles of the Little Colorado River and Petrified Forest National Park.

Fracking has been proven to pollute drinking water, cause illnesses for both humans and animals, deplete natural landscapes, lead to long-term economic bust after short-term booms, and even cause explosions. Do not allow one of America’s rich national parks and invaluable natural landscapes to be destroyed.