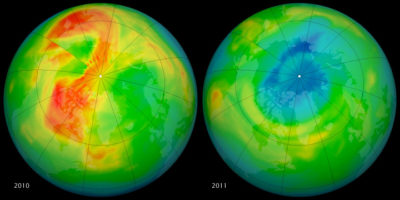 Scientists recently detected troubling atmospheric levels of a substance capable of destroying the ozone. Known as CFC-11 (chlorofluorocarbon), this compound is particularly harmful due to its ability to break down ozone molecules. When CFCs disintegrate after years in the atmosphere, they release chlorine atoms that strip the ozone of its molecular properties. In the end, they contribute to the growing hole hovering above Antarctica that exposes the Earth to harmful radiation. More radiation hitting the Earth’s surface means imminent danger for humans, animals, and plants.

Originally, this product was developed in the 1930s as a refrigerant. Eventually used as propellants in aerosol sprays and solvents, it took a while for scientists to grasp its dangerous potential. Despite being banned in 1987 with the Montreal Protocol, evidence shows that illegal emissions have been steadily increasing in East Asia. To deter climate change, urge the United Nations Environment Programme to seriously tackle this dilemma through improved air monitoring stations, sanctions, and new diplomacy. We can’t afford to have CFCs degrading the airspace.

Recently scientists announced that CFC-11 (chlorofluorocarbon) is on the rise in the atmosphere. While your committee thought the chemical was declining, it has actually been increasing at an alarming rate in East Asia since 2012. Studies show that CFCs disintegrate stratospheric molecules and stay intact for approximately 50 years – meaning this ozone-depleting gas must be continuously monitored. Research says that ozone recovery could be delayed by a decade if this situation isn’t resolved soon.

When it comes to protecting the atmosphere, chlorine-based chemicals are public enemy number one. Global warming will only be accelerated as ozone depletion continues, gradually leaving humans with less protection from intense solar energy. The bigger the hole gets, the more likely non-melanoma skin cancers and respiratory problems such as asthma, emphysema, and chronic bronchitis will transpire. Consider these options as we urge you to come up with new initiatives to rid the Earth of this toxic gas.