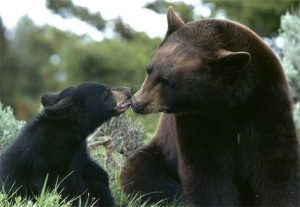 Goal: Punish father and son charged with killing a black bear and her cubs.

Two men charged with killing a protected black bear and her cubs are finally being taken to court, months after the incident. Video footage reportedly showed father and son Andrew and Owen Renning trespassing on a remote bear den; the pair reportedly claimed not to have known that the sow and her cubs were part of an observation program, or that it is illegal to kill black bears in most of Alaska.

Ignorance is no excuse for such alleged actions. Black bears are one of Alaska’s most threatened species to date, especially as the laws for their protection have been challenged multiple times by greedy hunters or even the government. These men allegedly committed a grave injustice against these poor animals; the cubs were reportedly heard screaming as their mother was gunned down, right before they themselves died, all allegedly so two men could attain some form of glory. The bears were skinned after their death; it is unknown whether they were meant to be trophies, or fur or meat to sell on the market.

A family of black bears was reportedly slaughtered by a duo of hunters, who allegedly claimed ignorance when told that it was illegal to hunt black bears in Anchorage, Alaska and that these three particular bears were part of an observation program. The duo has been taken to court months after the incident.

Claiming ignorance does not erase the dirty nature of their alleged deed. Black bears are one of the most threatened species in Alaska, especially with their protection laws being challenged as the government tries to revoke them to satisfy trophy hunters and the paranoid stereotype of bears as dangerous predators. These two men must face justice for their alleged slaughter of these creatures, to set an example for other hunters who may ever consider trespassing on protected grounds. We demand the maximum penalty be sought in this case.