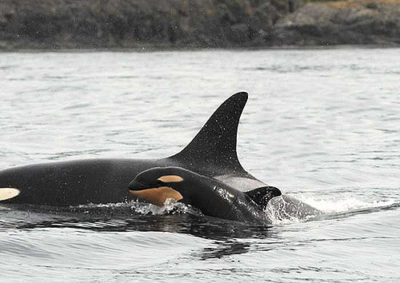 Goal: Take emergency measures to save an emaciated juvenile from a highly endangered orca population.

Researchers fear that a young orca from a particularly endangered group of killer whales may only have days to live unless emergency measures are taken to feed and provide her with potentially life-saving medicine. The four-year-old identified as J50, or ‘Scarlet,’ is one of only a handful of juveniles left within the declining Southern Resident Orca population, who are struggling to find enough food to eat in the waters off the coast of Washington.

The crisis Scarlet is facing is only the latest evidence that Southern Resident Orcas need our help. As Scarlet clings to life, another member of this endangered population has gained worldwide attention for carrying her deceased newborn calf around for over a week in an act of apparent mourning.

U.S. government officials cannot simply stand by and watch when action can be taken to save Scarlet and other ailing whales like her. Scarlet needs food and life-saving medicine delivered to her immediately. Sign this petition to call for an emergency plan to intervene on this young whale’s behalf.

A young whale in the Southern Resident Orca population is showing clear signs of distress. J50, also known as Scarlet, is dangerously emaciated and is estimated to only have days left to live unless something is done. We must intervene and take measures to save her life to help protect this declining group of whales.

We ask that you devote resources to assessing her current condition to see what can be done to improve her health as non-invasively as possible, including delivering food and medicine as needed. Long-term measures to protect the Chinook salmon stock that these whales depend on must be looked at as well, but for now we ask that you coordinate an emergency response to save this young whale before it is too late. With every remaining life precious and necessary to the future survival of this iconic orca population, we urge you to do all you can to save her from a cruel, slow death.