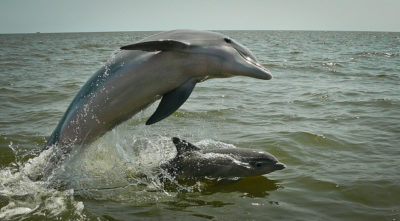 Goal: Enact laws that more strictly prohibit the feeding of wild dolphins to protect them from harm.

Over the past sixteen years, researchers investigating the remains of dolphins found dead in the Gulf of Mexico have discovered that 21 of them died of apparent gunshot wounds, including one pregnant female. Experts now suspect that these tragic deaths may be tied to the fact that many wild dolphins look to humans for food because of tourists and others feeding them illegally.

While those responsible for having killed the pregnant female dolphin earlier this year and others like her have not yet been found and brought to justice, marine biologists believe this trend will continue as long as dolphins look to people for food. They suspect that the dolphins may have been killed by fishermen who shot the animals as a form of revenge for taking fish from their nets after these animals began seeking them out for food.

Dolphins must not learn to associate people with food for their own good. Sign below and demand that Mississippi officials enact stronger laws to hold people accountable for feeding wild dolphins and putting their lives at risk.

The ongoing mystery surrounding the suspicious dolphin deaths in the northern Gulf of Mexico has left animal lovers deeply concerned, but experts say the cause may not be so mysterious after all. The 21 dolphins that have been discovered dead from gunshot wounds over the past sixteen years were likely targeted by fishermen frustrated with the animals after they stole from their nets. According to marine biologists, this kind of behavior can be directly attributed to humans regularly giving these wild creatures food handouts.

Wild animals, including dolphins, not only become more trusting when offered food by humans, but also more daring. As a result, they may begin to beg or even steal food in a brazen manner. These confrontations put their lives at risk, and unfortunately may have led to these tragic deaths. That is why I am urging you not just to seek out and punish those responsible for directly harming these dolphins, but to also enact stronger laws that hold everyone accountable for ensuring wild creatures remain wild and not dependent on people for food.