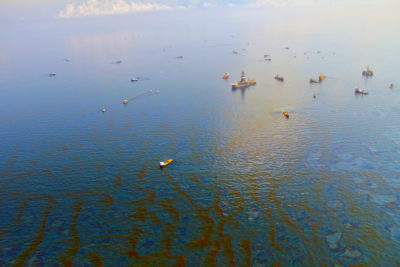 Goal: Do not eliminate safeguards and risk another catastrophic oil spill like the BP Deepwater Horizon disaster.

The Trump administration is not only pushing to expand offshore drilling despite the extreme environmental threats it poses, but is now also trying to eliminate key safety rules that are in place to prevent future oil disasters. The BP Deepwater Horizon disaster, a catastrophic oil spill in 2010, had devastating effects that are still being felt today. The Well Control Rule is a safeguard that was put in place after this tragedy to prevent such a thing from happening again. It is one of the few safety measures we have, and the Trump administration’s proposed revisions to this rule weaken it deeply and render offshore drilling even more dangerous.

Over 200 million gallons of oil were dumped into the Gulf of Mexico during the BP Deepwater Horizon disaster. After an exploratory well blowout, the company’s rig exploded, killing 11 crew members and resulting in 87 days of spillage before engineers managed to seal the blowout. Oceana reports that multiple studies have confirmed that oil contamination is a critical factor in the Gulf of Mexico’s longest and largest recorded dolphin die-out. The organization states, “Make no mistake: right now, in the Gulf of Mexico, dolphins are still suffering from the effects of the 2010 BP Deepwater Horizon oil spill catastrophe.” Research shows that dolphins currently living in this area only give birth to calves 19% of the time, and estimates that it will take as long as 40 years for their populations to recover. It is unacceptable to further increase risks of this type of devastation occurring again. Sign below to demand that the Well Control Rule be left intact, preserving the safeguards against catastrophic oil spills and protecting the dolphins.

Your administration’s intent to weaken the Well Control Rule—one of the only safeguards against devastating oil spills, which even now does not provide sufficient protection—is unacceptable. These types of disasters are catastrophic for the environment and for dolphin populations, not to mention dangerous for workers and for coastal communities. It is nothing short of reckless and irresponsible to roll back protections while your administration simultaneously seeks to expand offshore oil drilling.

The horrific effects of the 2010 BP Deepwater Horizon disaster—the spill that claimed the lives of 11 crew members, dumped over 200 million gallons of oil into the Gulf of Mexico over 87 days, and contributed to the worst dolphin die-off in that area’s recorded history—are still being felt. This type of catastrophe must be avoided at all costs. The proposed dismantling of safety standards would make offshore drilling even more dangerous, which must not be allowed to happen. I urge you to protect the safety of our environment, our marine life, and our coastal communities. Do not weaken the protections of the Well Control Rule.