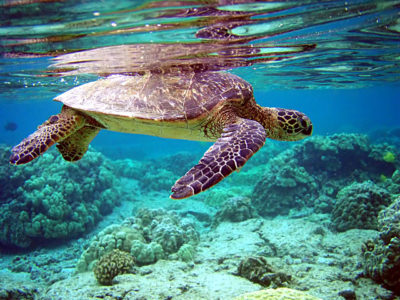 Goal: Investigate and end the cause of hundreds of sea turtles’ deaths in Florida.

Hundreds of sea turtles have washed up on Florida’s shores, most likely due to an abnormally long algae bloom in the waters. According to a report from turtle researcher Kelly Sloan, the deaths of these turtles coincides with the start of this year’s algae bloom, which she calls “[the] longest continued bloom since 2006.” The loss of this many turtles impedes their ability to recover their numbers after years of endangerment.

Reports state that it us unknown if red tide poisoning is indeed responsible for the deaths of these turtles, but that it is the most likely cause. Algae blooms are one of the most highly toxic naturally occurring events, and while animals usually know to avoid the reddened waters, the toxins can remain in the water supply for months after the end of a bloom. These toxins affect the nerves and the gills of sea creatures, leading to instant or inevitable death.

We cannot let the deaths of these turtles go unsolved, nor can we allow another mass mortality event like this one in the future. Sign this petition to ensure that no more turtles or other aquatic wildlife die under such circumstances.

Hundreds of sea turtles mysteriously died, their bodies washing up on Florida’s shores. While the exact cause has yet to be determined, the prime suspect is the yearly algae bloom that has lasted longer than average. Algae blooms and red tide poisoning are directly responsible for the deaths of many sea creatures each year, due to the toxins remaining in the water long after the end of a bloom, and a prolonged bloom just may have ended the lives of these turtles.

You must fully investigate the matter and take measures towards putting an end to it so that another mass mortality event does not occur. The deaths of this many turtles impedes their chance of survival as a species, and their ability to repopulate their numbers. The lives of many turtles are in the balance, and you must ensure their survival.