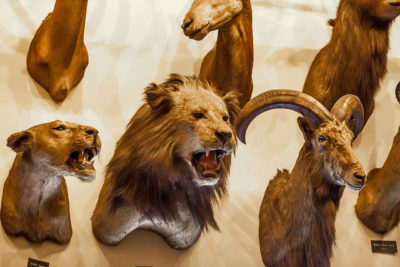 Goal: Reverse decision to allow trophy hunters to gain permits to bring back the heads and other body parts from slaughtered lions.

American trophy hunters are being given permission to bring back the severed heads and other body parts from lions they have killed in various parts of Africa. Under the Trump administration, the U.S. Fish and Wildlife Service appears to be condoning this barbaric practice, issuing at least three dozen such permits over the past two years.

The news that so many permits have been issued for lion trophies is unsurprising, given the fact that the Trump administration has also recently allowed hunters to start bringing back trophies from slain elephants as well. However, the fact that many of these hunters are wealthy Republican donors has raised more than a few eyebrows among environmental watchdog groups.

The idea that hunting somehow helps to protect vulnerable species has been proven time and again to be false. If lions and other threatened African wildlife are to survive in their native land, they must be allowed to live without the threat of being shot by trophy hunters or poachers. Sign this petition and demand that President Trump stop allowing Americans to bring back lion trophies from their bloodthirsty expeditions.

Trophy hunting is a wasteful and barbaric practice that does nothing to help the conservation of threatened and endangered species. Despite this fact, the U.S. Fish and Wildlife service has issued three dozen permits over the past two years to allow American hunters to bring back the severed heads and other body parts from lions they have killed while abroad. Many of these hunters are wealthy donors for a variety of Republican fundraising efforts, which seriously calls into question the ethics and motivation behind granting these permits in the first place.

Being allowed to kill a lion for the thrill of bringing home a trophy should not be given as a reward for political contributions or other favors. The survival of all lions and many other iconic African species is on the line. We demand that you stop allowing American hunters, regardless of political ideology, to bring back trophies from lions they have killed.