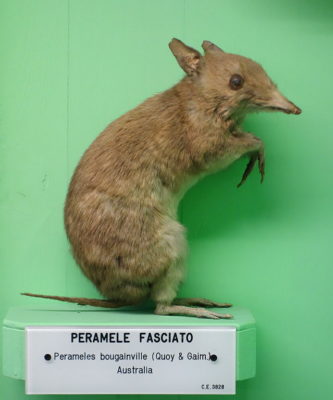 Target: Josh Frydenberg, Minister for the Environment and Energy of Australia

The western barred bandicoot is on the verge of extinction, due to all but one species remaining and several of that particular species having disappeared. The western barred was once five unique species, four of which ceased to thrive due to the onset of predators and the loss of its habitat to agriculture. The surviving group was translocated to South Australia, which researchers are now calling “a mistake.”

Studies show that the bandicoot clearly thrived more in its original habitat of West Australia, but that is also where four subspecies of western barred went extinct. For the species to survive, they would need to be moved back to their original habitat, but many changes would need to be made to ensure their survival. Agriculture must halt in order to preserve adequate land for the bandicoot, while predator-free reserves must be formed to protect the species from attacks. It is very important that the remaining species survive, as bandicoots and their habit of digging are vital to the Australian ecosystem.

It is not too late to save the bandicoot, and it is hoped that there will be more diversity in breeding patterns in the future. Sign this petition to save the western barred bandicoot from extinction.

Western barred bandicoots are down to one species, which is endangered despite efforts to protect it via a translocation to South Australia. While they are protected from predators, they are not thriving as they did in their original home of West Australia. The bandicoot is vital to the ecosystem, as their habit of digging greatly benefits the soil and enables healthier plant growth.

The species would benefit from being returned to the West, but changes must be made. The four extinct subspecies of bandicoot disappeared due to predators and habitat loss. Agriculture must be halted to preserve land for the species, while predator-proof reserves must also be formed. You must ensure that this one remaining bandicoot species is able to survive and rebuild its numbers.