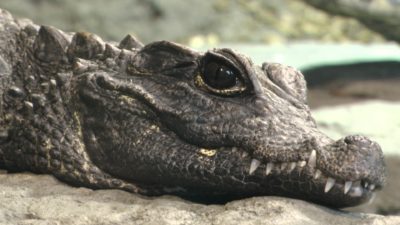 Goal: Punish those responsible for slaughtering crocodiles in a wildlife sanctuary in retaliation for a villager’s death.

Photos showing the bloody aftermath of the ruthless massacre of nearly three hundred crocodiles in Indonesia have shocked the world, all while Indonesian officials claim they have been unable to intervene or press charges. This photo evidence should be used to bring justice for these protected reptiles.

The rampant slaughter reportedly began shortly after a man from West Papua identified as Sugito had wandered into the sanctuary and was attacked and killed by one of the resident crocodiles. This incident, caused by what appears to have been one individual’s reckless actions, allegedly inspired a mob of angry villagers to storm the sanctuary after his funeral, killing every crocodile in sight using everything from shovels and clubs to hand knives.

This sanctuary was established to breed and house protected saltwater crocodiles and New Guinea crocodiles, and the loss of so many of these animals is a major setback to the conservation of both species. Sign this petition to demand that Indonesian officials find and prosecute those who are responsible for having participated in this bloody mob.

A mob in West Papua armed with knives, hammers and other makeshift weapons is believed to be responsible for the deaths of hundreds of protected crocodiles, as evidenced by the many photographs that have emerged in the aftermath showing the piled corpses of these reptiles. While it is believed that one of these crocodiles may have killed a local man, the slaughter of nearly three hundred protected crocodiles is a senseless act of violence that must not go unpunished. We urge you to use this photographic evidence to find and prosecute those who are believed to be responsible for this massacre.

The man, known only as Sugito, was attacked by one of the crocodiles after he had wandered into the sanctuary, allegedly looking for animal feed. While his death is a tragedy, it highlights the need for respect for these large and powerful reptiles, and it does not justify the rampant killing of these protected animals. Please uphold the existing laws protecting these vulnerable creatures and find those responsible so they may be brought to justice.