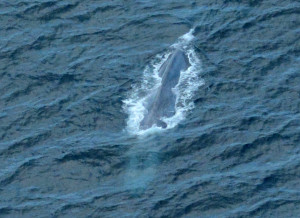 Goal: Investigate and punish those responsible for the alleged killing of an endangered blue whale.

One of the world’s rarest and most beautiful marine animals was allegedly slaughtered by a government-approved expedition. Earlier this week, members of Iceland’s Hvalur hf whaling company reportedly harpooned and killed a blue whale, a critically endangered species that has been federally protected for decades. If the kill is confirmed, this would mark the first known human-driven slaughter of a blue whale in 40 years.

Although whaling is permitted and has a long tradition in Iceland, the government outlawed the killing of blue whales after previously unchecked executions had driven the species’ numbers to dangerously low levels. A crew leader has defended the alleged kill, claiming—despite the assertion of whale experts—that the animal was not a blue whale but rather a type of whale that does not enjoy government protections. The crew member reportedly concedes that if his crew did kill a blue whale, it was only an accident.

This half-hearted defense and dismissive apology will not bring back an animal that stands as a needed lifeline for a species in crisis. Sign this petition to demand accountability for a careless action that puts a world wonder at further risk.

In released pictures, they can allegedly be seen assessing their kill. One even reportedly stands atop the carcass for a photo op. Yet these individuals who ply their trade in the whaling industry claim ignorance in their potential slaughter of one of the world’s most imminently endangered species.

The actions of the the Hvalur hf whaling company were reckless at best and deliberately malicious at worst. Since the 1970s, the Icelandic government has recognized its special responsibility to the blue whale: a magnificent creature nearly driven to extinction by thoughtless human activity. Your government licensed the whaling company under fire, and as such you have the responsibility to investigate and ensure that if this group did indeed slaughter the first blue whale in over four decades, they receive the proper punishment.

Moreover, you have a responsibility to the vulnerable torchbearers of this species by reasserting in the strongest terms that their outrageous slaughter will not be condoned or forgotten. We demand immediate action.