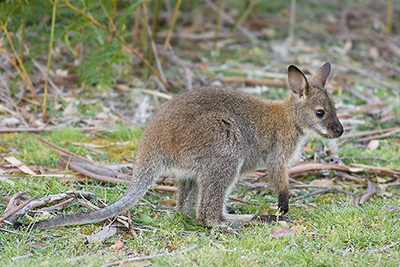 Goal: Remove wallabies from an enclosure where they endure starvation and deadly injuries.

Wallabies are being imprisoned and starved in Australia. At the same time, officials responsible for these dire circumstances are blocking efforts to remedy the crisis. Worse yet, many of the desperate animals have died from injuries they suffered in their attempts to escape their man-made prisons.

Ground zero for this crisis is the Centenary Trinity Beach Bulldogs AFL Club Park, an area undergoing extensive development and maintenance projects. To keep the region’s wallabies from interfering with these projects, a regional council enclosed the native animals within fencing, essentially cutting off their means of escaping a small area. Compounding this problem, the fencing has stayed in place for close to a year. The wallabies have begun hurling themselves against the unforgiving fencing, incurring serious injury and—in the most tragic cases—death. While advocates strongly believe these desperate actions are driven by starvation and habitat loss, dismissive officials claim the wallabies are merely reacting to agitation from passersby.

This tragedy could have been prevented by relocating the wallabies to a safer location before construction projects began. Even now, those responsible refuse to acknowledge their deadly errors. Efforts by advocates to relocate the wallabies have been consistently blocked.

Sign this petition to demand accountability and urge immediate action in a year-long act of state-sponsored animal cruelty.

A critical and ongoing crisis with legal repercussions is taking place in the Cairns region. Social media videos detailing some of your region’s natural living wonders, wallabies, dying in a brutal manner have sparked widespread condemnation and outrage. These animals are currently trapped within the Centenary Trinity Beach Bulldogs AFL Club Park; if the situation is not remedied immediately, more will succumb to starvation or desperate self-mutilation.

A fence installed by the Cairns Regional Council is keeping these animals as essential prisoners without access to their natural food or habitat. The wallabies’ bloody attacks on this makeshift prison are likely a last-ditch attempt at escape and at continued life. Regional officials have curtailed efforts to relocate these under-siege animals, and in fact they have absconded responsibility for relocation onto the state government.

A lawsuit is in process, but by the time complex legal proceedings are untangled, it may be too late for these awe-inspiring creatures. Please make every effort to aid animals that are such testaments to Australia’s natural beauty.