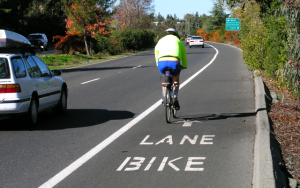 Goal: Invest in bicycling as an environmentally beneficial mode of transportation.

A sizable percentage (close to 50 percent, by some estimates) of the air pollution choking our planet’s skies arises from our modes of transportation. Motor vehicles in particular emit large quantities of destructive pollutants like carbon monoxide, nitrogen oxide, hydrocarbons, and toxic particulates. Over time, these pollutants help erode the earth’s ozone layer and boost temperatures planetwide, wreaking havoc on habitats and ecosystems of all varieties. Many of these pollutants also have links to cancer and other devastating health conditions. Growing cities in particular have become a large part of the problem as the demands for fast and efficient transportation flourish. Some of these regions, however, have the potential to become part of the solution through investments in a cost-friendly and, more importantly, an environmentally-friendly method of transportation: bicycling.

The city of Oxford, England stands as a prime candidate for a promising, cleaner approach to travel. The “city of dreaming spires” is renowned for its rich historical legacy and its youthful populace who already utilize cycling as a main form of transportation. This method is in many ways ideally suited for the city and other burgeoning English towns such as Cambridge. Distances traveled are relatively small, the historic landmarks of the city make intrusive roadways undesirable for many citizens, and employment opportunities in sectors ranging from tech and science to publishing populate the entire landscape.

Yet rather than focusing on a popular method that studies indicate accounts for over a quarter of current travel within the city, leaders instead are focusing on other means of transportation development such as railways and buses. In fact, the city often makes it harder for cyclists by not opening key roads to bicycle transportation and failing to appoint officials dedicated to overseeing this mode of transportation.

Sign the petition below to encourage the incorporation of bicycling as a centerpiece of future infrastructure and transportation initiatives.

Your city is growing, but it is growing into an uncertain future. Citizens, especially your youth, continue to worry about the state of our planet and its wellness. Green solutions are no longer just a pleasantry or an aspiration but a necessity.

As one of the major centers for bicycle transportation in the world, you have the opportunity to set a literally world-changing precedent. While you ponder ways to meet Oxford’s growing travel needs, the ideal answer may be ever-present in the communities that comprise your town. The National Infrastructure Commission recently released findings detailing the rise of bicycling within Oxford. Estimates say 25 percent of your populace even utilizes this environmentally safe option as a primary form of transportation.

Build upon this promise, and in the process protect your city’s rich legacy from unnecessary, detrimental road projects that carry a significantly higher price tag. Open the roadways you do have to more modes of travel, and appoint officials who oversee and help improve this promising mode of transportation.

Invest in bicycling because in many respects, bicycle paths may indeed prove to be a pathway to a better tomorrow.