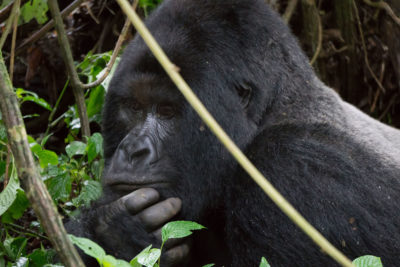 Target: Joseph Kabila, President of the Democratic Republic of the Congo

Goal: Don’t put critically endangered gorillas and other species at risk by allowing oil drilling within the boundaries of the Virunga and Salonga National Parks.

The Democratic Republic of Congo government is discussing the possibility of opening up one-fifth of the protected Virunga National Park to oil exploration and drilling. This park, along with nearby Salonga National Park, is home to critically endangered mountain gorillas, as well as bush elephants and another endangered ape known as the bonobo.

Members of the DR Congo government have stated it is within their rights to drill anywhere in the country, but allowing oil companies into these parks could pose a global risk by contributing to the worldwide climate change crisis. If the cabinet approves the decision, up to 664 square miles of Africa’s oldest wildlife reserve would be declassified and up for grabs for international oil companies to exploit at will. While Virunga National Park has remained closed following conflict with poachers and kidnapping incidents earlier this year, it is one of the few places mountain gorillas have survived relatively unscathed.

More must be done both to protect these parks and to address the growing instability and violence within the region. Sign below and demand that no drilling be allowed in these beautiful and unique parks.

The future of Virunga National Park, the oldest such reserve on the continent of Africa and home to half of the world’s mountain gorillas, is in jeopardy. If your government moves ahead with plans to open up parts of this park and nearby Salonga National Park to oil drilling, widespread environmental destruction will almost inevitably occur. That is why we, the undersigned, demand that you not open up any sections of these parks to oil exploration that would most certainly put endangered wildlife at risk.

Oil drilling in these parks will also release enormous amounts of carbon dioxide into the atmosphere, which will contribute to global warming. For this reason, and for the well-being of the gorillas and other living creatures that call these jungle-cloaked volcanic mountains home, we urge you to oppose all plans to allow oil exploration within these parks and to do what you can to improve stability and reduce conflict within this troubled region.