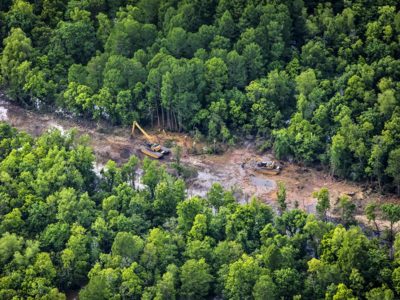 Goal: Don’t allow a company to build pipeline after judge denied their permit.

The Bayou Bridge pipeline in Louisiana is being built despite not having a permit. The company behind the pipeline, Energy Transfer Partners, is continuing construction—even though a state judge denied their permit. The 162- mile pipeline is going to damage the surrounding area of Louisiana’s Atchafalaya Basin.

The animals and the environment are going to suffer greatly due to this pipeline. It needs to be stopped. We cannot allow Energy Transfer Partners to destroy this beautiful basin and kill the animals that inhabit the area. Demand that Louisiana stops this company from their illegal construction of this pipeline and punishes them for not following the law.

The Bayou Bridge pipeline is being built in Louisiana after a state judge denied the company’s permit. The company responsible is Energy Transfer Partners. They are continuing to build the pipeline despite having a permit. They are breaking the law and it is going to have a disastrous outcome for the animals and environment in the area. Many animals reside in this area. Affecting their homes and destroying populations of animals are going to have negative effects on our environment and ecosystem.

The pipeline would allow transport of explosive Bakken crude oil from North Dakota to surrounding areas. A state judge ruled that the permit issued failed to consider impacts that it would have on St. James. There are more than 150 industrial plants and refineries in this area. This company is not listening to the court system and needs to be punished. We demand that Energy Transfer Partners are stopped in developing the pipeline and they are punished for not obeying the law.