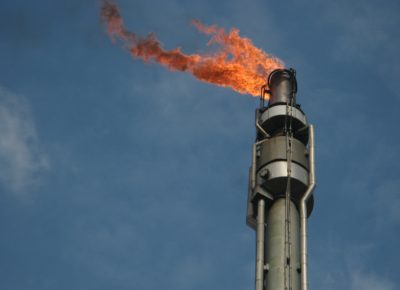 Goal: Reduce methane leaks from the oil and gas industry that are contributing to climate change.

Natural gas may not be the clean alternative to coal that it is widely believed to be. Methane leaks from natural gas refineries may be emitting just as much greenhouse gases as coal-fired electricity production, and there is no end in sight. This “clean” fuel is contributing significantly to climate change but is unacknowledged by the EPA.

A recent study has shown that the EPA has largely underestimated methane emissions from the oil and gas industry. A compilation of over 100 independent datasets revealed that methane leaks from natural gas processing equate to approximately 2.3% of natural gas production. One researcher used optical gas imaging to spot methane leaks from equipment such as condensate tanks, which would otherwise go unnoticed to the naked eye. Lost methane from the entire natural gas industry, emitted directly to the atmosphere, could power over 10 million houses for an entire year. Estimates by the EPA consider only the emissions from the fuel burning to generate the electricity, not the overall process, and therefore underestimate the total emissions by as much as 60%.

Nearly one third of electricity generated in the U.S. is from natural gas-fired plants. This so-called cleaner fuel is just as polluting as coal overall, and something needs to be done. Rather than rolling back the Obama administration’s attempt to limit these methane leaks, the EPA needs to promote better control technologies and limit these fugitive methane leaks. Sign the petition to encourage regulatory action by the EPA to significantly reduce these methane emissions.

Methane leaks from supposedly clean natural gas processing are just as polluting as coal-fired power generation, yet this administration is doing nothing to stop these emissions.

A study of over 100 natural gas sites using optical gas imaging revealed that over 20% of facilities examined were releasing methane into the atmosphere. These fugitive emissions were from parts of the process that are not typically regulated as emissions sources, such as leaking condensate tanks. An independent compilation of similar studies by the Environmental Defense Fund has estimated emissions from natural gas-fired power generation are up to 60% greater than EPA estimates due to fugitive gas leaks that the EPA does not account for. The approximate 2.3% methane loss from these leaks could power 10 million homes for an entire year. That represents a significant revenue loss and a significant emission of greenhouse gases.

These methane leaks are destructive to the environment and frankly a waste of resources. The EPA needs to mandate better control technologies to prevent these significant methane emissions from contributing further to climate change. Do not reverse the Obama administration’s efforts to reduce this emissions source. Promote better control technologies in this industry and crack down on these unplanned releases.