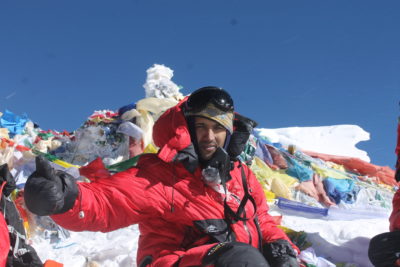 They say to take only pictures and leave only footprints, but booming popularity in summiting Mt. Everest has led to a devastating impact on the mountain’s beauty. Hundreds of tons of garbage and human waste have been left behind by climbers, polluting the environment and the area’s natural beauty. The world’s highest peak is also the world’s highest rubbish heap.

Nearly 4,000 climbers have summitted Mt. Everest since the first completed climb in 1953, with an increasing number of climbers every year. The Nepalese and Tibetan governments have different requirements, but both levy fines for climbers who don’t return to base with the requisite amount of their waste. According to the Sagarmatha Pollution Control Committee (SPCC), which has overseen attempts to clean up the mountain, only about half of climbers return to the bottom with the required amount of waste. Evidently, these fines are insignificant enough to ignore in comparison to the approximately $20,000 to $100,000 that climbers spend on expeditions. Last year the SPCC collected and removed an equivalent of three double-decker buses worth of trash from Mt. Everest. However, this barely scratches the surface of the tents, equipment, and human waste already left behind, in addition to the estimated 130 more tons of trash each year.

With increased interest in climbing Mt. Everest every year and climate change melting the ice and snow cover, this problem will only worsen. Human waste buried at base camp, which becomes uncovered and runs into the valley during monsoon season, threatens the villages below. This problem must be rectified in order to return Mt. Everest to its natural beauty. Sign the petition to urge the Nepalese government to levy harsher penalties for climbers leaving more behind than just their footprints.

The pollution of Mt. Everest by rich, uncaring climbers is astounding. The SPCC has brought down many tons of garbage already, and plans to bring more, but they may never catch up to the devastating impact climbers have already made with human waste and garbage left behind.

The mountain is estimated to be covered in hundreds of tons of waste, with an additional 130 tons added by climbers every year. The Nepalese government needs to take action to incentivize climbers to pick up after themselves and not destroy this beautiful landmark for future generations. As it stands now, the cost of climbers returning with their own waste is insignificant compared to the tens or hundreds of thousands of dollars spent on the expedition to begin with. The fines for descending without all of what a climber brought with them need to be prohibitive.

Climbers take pride in summiting the world’s highest peak but seem to have no care for how they leave that accomplishment for others. And every year, the trash heap grows. Please, don’t allow the continued deposit of rubbish on one of the world’s most incredible landmarks. Make these climbers return with everything they brought or pay the consequences.