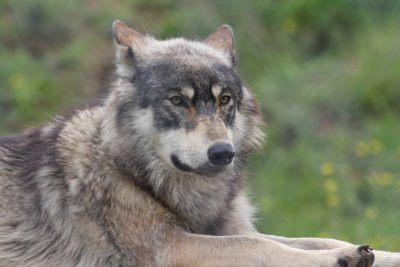 Goal: Do not expose wolves to trophy hunters and the threat of extinction.

Nearly all wolves across all of the lower 48 states of the U.S. may be left exposed to trapping, trophy hunting, and the threat of extinction, as the Trump Administration confirmed that it is considering a proposal to remove their Endangered Species protections. As Collette Adkins of the Center for Biological Diversity states, “It’s deeply troubling to see the Trump Administration trying to prematurely kick wolves off the endangered species list. Time and again the courts have told the Service that wolves need further recovery before their protections can be removed. But the agency is dead-set on appeasing special interests who want to kill these amazing animals.”

The Center for Biological Diversity reports that Gavin Shire, the U.S. Fish and Wildlife Service’s Chief of Public Affairs, said in an email statement that the department expects to propose reversing the gray wolf’s status “by the end of the calendar year.” It has already stripped the wolf of protections in the Great Lakes region, resulting in the cruel and unnecessary killing of hundreds of wolves. When the agency tried to extend this decision to apply to the rest of the country in 2013, courts not only ruled against it, but restored protections in the Great Lakes and later upheld both decisions. The courts said the Service’s removal of wolf protections in the Great Lakes region unlawfully ignored the consequences to wolf populations in other areas of the nation that are still recovering. These court rulings must not be ignored, or America’s wolves may face the threat of extinction due to trophy hunting and political corruption. Sign below to demand that wolves remain protected under the Endangered Species Act.

As a leader of the Endangered Species Program, it is your responsibility to ensure the protection and restoration of our nation’s wildlife. Nearly all of America’s wolves will be put at risk if they are stripped of their Endangered Species protections. This is why courts have ruled to maintain these protections in the past. Wolf populations are still recovering and taking their protections away prematurely irresponsibly exposes these innocent creatures to threats of extinction through cruel trophy hunting and trapping.

It is vital that wolves’ protections under the Endangered Species Act be upheld. Political interests and the whims of trophy hunters must not be put before the survival and well-being of innocent creatures who are integral to the landscape of our country as we know it. As Collette Adkins of the Center for Biological Diversity says, “Like so many Americans, I treasure having wolves and grizzlies in the wild and don’t want to see them shot and trapped for blood sport or pelts. We’re ready for a fight, and we’re going to do all that we can to make sure the feds fulfill their obligation to restore wolves and grizzlies across the country.” I urge you to ensure the rejection of any proposal that would remove protections for America’s wolves.