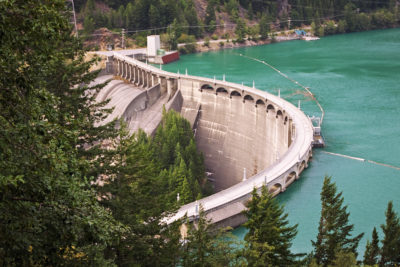 Eleven hydroelectric dam projects along the Mekong River in Cambodia threaten the area’s river ecology and fish populations. These dams could irreparably harm seasonal flood patterns and the livelihoods of the farmers and fishermen who rely on the river. Permanent environmental destruction will occur with the development of the hydroelectric dams.

During monsoon season, the Mekong River floods May through November and backs up into the Tonle Sap River and Tonle Sap Lake. After the rain ends and water recedes, the river flow reverses in the Tonle Sap River and it returns to being a tributary to the Mekong River. Farmers rely on the flood waters bringing nutrients and sediment to their farm fields and fishermen rely on the predictable fish migration patterns. Residents in the area have built their lives and culture around the flooding, constructing floating or stilted homes and using the natural patterns of the river for their income. The dams would significantly alter this hydrology, changing fish migration patterns, altering sediment deposition, and otherwise threatening the food security of the area. Fish and rice are food staples not only in Cambodia but in all of Southeast Asia.

The hydroelectric dams might be a step towards modernizing Cambodia but they will come at a cost. The livelihoods of the residents that the hydropower will purportedly help could be destroyed by this development. That is not to mention the significant environmental destruction. Sign the petition to prevent the destruction of the Mekong River and irreversible damage to the residents who rely on it.

The hydroelectric dam projects up and down the Mekong River threaten Cambodia’s ecosystems and residents. It is understood that the hydroelectric dams are meant to modernize Cambodia and provide electricity to the half of the population without, but this comes at a significant cost. The residents here have adapted to the predictable flood patterns during monsoon season, building their lives and culture around it. Farmers and fishermen rely on fish migration patterns and sediment deposition to feed themselves and the region. The majority of the region’s fish, rice, and vegetables come from small farms. Cambodia’s food security would be threatened, not to mention all of Southeast Asia. All of this would be permanently and negatively impacted by changing the hydrology of the Mekong River with more hydroelectric dams.

Please, do not let modernization destroy your ecosystems and residents’ lives. Consideration needs to be made for the damage to the Mekong River hydrology, fishing migration patterns, and the residents who rely on the river to feed their families. Stop the development of these hydroelectric dams and allow your citizens to carry on their way of life unimpeded.