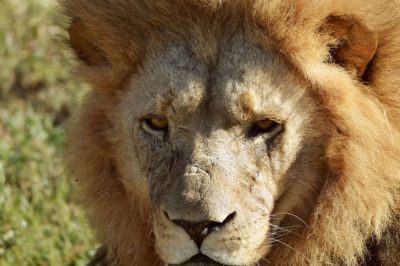 Goal: Do not allow wildlife hunting for sport at Kruger National Park or the adjacent private nature reserves—lands supposedly dedicated to “conservation.”

Tragically, a male lion was killed when he was most likely lured with bait out of Kruger National Park and into Umbabat Private Nature Reserve, allegedly by an American trophy hunter. Unconfirmed reports by the Daily Maverick suggest that this lion may have been the leader of his pride. If this is the case, his cubs will most likely be killed as well, as the other males of the pride vie for leadership. This tragedy should have been avoidable: the Associated Private Nature Reserves (APNR), which owns the land where the lion was killed along with over 1,000 square kilometers of land supposedly meant for “conservation,” did not include this lion in its hunting quota. However, the Daily Maverick reports that permission to hunt was given anyway, under the licensing authority of the Mpumalanga Tourism and Parks Agency. The organization allowed this despite receiving a Cease and Desist warning from two non-profits, EMS Foundation and Ban Animal Trading, threatening legal action if the hunt occurred.

This unfathomable cruelty is symptomatic of wider corruption. While the killing of this lion should have fallen outside the realm of permissible hunts as per the APNR quota sanctioned by the Kruger National Park and Provincial Authorities, many argue that no hunting should be allowed on these lands at all. The Daily Maverick article reports that the combined quota for hunting on the national private reserves Timbavati, Klaserie, Umbabat and Balule in 2018 was 4,467 animals, including “52 elephants plus a bull older than 50 in Umbabat which could potentially be a 100-pound tusker, which many argue should never be hunted. It also listed 36 buffalo (despite a 68% drop in numbers to 2,327 in 2017), 44 kudu, 19 warthogs, seven hippos, a lion, a leopard, eight hyenas, five giraffes and 4,171 impalas.” The killing of these innocent animals is a travesty that must be stopped. Sign below to demand that wildlife hunts be forbidden on national reserves and in Kruger National Park.

The Mpumalanga Tourism and Parks Agency must stop allowing wildlife to be hunted on lands that should be meant for conservation. The tragic killing of a male lion, supposedly lured out of Kruger National Park by an alleged American trophy hunter and killed in Umbabat Private Nature Reserve, was not permitted by the 2018 APNR hunting quota for those lands and never should have been sanctioned by your agency. The existence of this quota is itself an unacceptable cruelty, and should be eliminated entirely.

The innocent wildlife allowed to be hunted on these reserves must be preserved, especially as their numbers continue to plummet. Conservationists, activists, and tourists alike are fighting to stop the killing of these animals. Your agency even received a Cease and Desist warning from the EMS Foundation and Ban Animal Trading regarding the hunt of the male lion that you permitted to be killed. In addition to the cruelty of the unnecessary deaths of these animals, banning hunts would benefit the tourism industry, which relies on keeping these animals alive. I urge you to stop allowing wildlife to be hunted at Kruger National Park and the surrounding national private reserves.