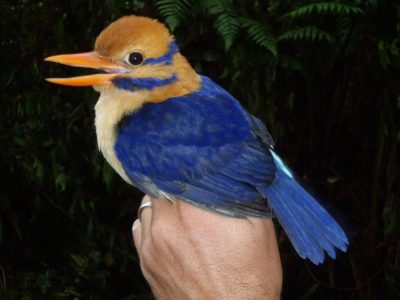 Deep within the forests of Guadalcanal in the Solomon Islands, a male mustache kingfisher was photographed for the first time shortly before being killed for scientific research. This was Christopher Filardi’s decision, the director of Pacific Programs at the American Museum of Natural History’s Center for Biodiversity and Conservation. According to his field journal, the bird ¨specimen¨ was collected for further speculation despite less than 1,000 remaining in the wild.

Although Dr. Filardi tried to justify his actions by saying that a specimen was needed to accurately record the bird’s features and decipher human impact on the birds’ survival, the scientific community is rightfully outraged. How can someone be searching for a bird for more than 20 years, only to take its life once it is encountered? Sign the petition to decry this unnecessary killing while urging influential conservationists to formally denounce such practices.

As the CEO of the Audubon Society, you have the responsibility to serve as a watchdog in cases of unethical scientific research. Not long ago, fellow ornithologist Christopher Filardi stumbled across the extremely uncommon male mustache kingfisher on Guadalcanal in the Solomon Islands – its only known habitat. Moments after being photographed, this endangered species was euthanized. So far you haven’t expressed any outrage on this matter, which is disappointing, to say the least, considering the dwindling population.

In no way, shape, or form does the conservation of birds require killing rare ones for scientific study. Conservation biology doesn’t need to be so bloody. Such practices are going to send the wrong messages to future generations who will feel entitled to kill beautiful creatures found in nature. In short, it will set a dangerous precedent for human-animal interactions. Please rectify this cause by speaking out against this matter.