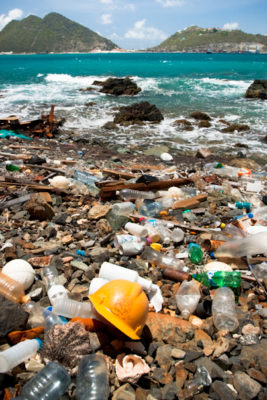 Goal: Stop mass amounts of mismanaged plastic waste from killing marine animals by minimizing the use of plastic.

A pilot whale that washed ashore in Thailand tragically died after five days in the care of veterinarians, who removed 17 pounds of plastic from the whale’s stomach. They pulled about 80 soaking wet plastic trash bags from inside the whale. Plastic debris is a global problem and is massively dangerous to wildlife—especially marine animals, because so much of this waste ends up in the ocean, where these animals mistake it for food. This is what scientists at the Thailand Department of Marine and Coastal Services say is the likely cause of this pilot whale’s death. As Nick Mallos of the Ocean Conservancy states, “Whether it’s a straw or whether it’s a bottle cap, those items can be eaten by animals, and they pose threats through getting stuck in their digestive tracts. It can tear their stomachs. So these products in their entirety are problematic, but what’s equally, if not even more, concerning is that over time these materials are in the ocean, they begin to break up into smaller and smaller pieces.”

According to a study in the journal Science, Thailand was among the six countries with the most “mismanaged plastic waste” in 2010. In light of the example of this whale’s death—which is one of the hundreds of thousands of marine deaths caused by plastic that go largely unnoticed by humans—many are calling on Thailand’s government to take action to reduce plastic by taxing either producers or consumers. As Enric Sala, a marine ecologist with National Geographic, points out, “Every minute [there] is the equivalent of a garbage truck full of plastic going into the ocean. The problem is so huge, but the solution is easy. We can stop plastic from getting into the ocean, and this has to happen at different levels.” Sign below to demand that Thailand do its part and reduce its plastic waste to save our oceans.

The horrific death of a pilot whale that washed ashore on the beaches of Thailand with 17 pounds of plastic lodged in its stomach is indicative of the massive threat posed to our ocean environments and marine life by plastic waste. This threat cannot continue to go unchecked. According to marine ecologist Enric Sala, “Every minute [there] is the equivalent of a garbage truck full of plastic going into the ocean.” Thailand must do its part to help solve this problem.

A study reported that Thailand was one of the top countries with “mismanaged plastic waste” in the year 2010. This problem is rampant in the Asia-Pacific region in particular, and it is therefore your responsibility to ensure that your country does its part. Now is the time to reduce Thailand’s plastic waste and ensure that it is better managed, by imposing taxes either on companies that produce these plastics or on the consumers who use them. I urge you to protect our environment for future generations, and to save the lives of the innocent creatures being killed by human waste. Please take steps immediately to reduce Thailand’s plastic use and keep our oceans clean.