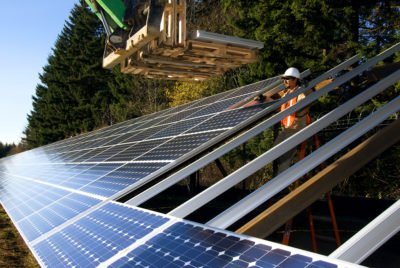 Goal: Stop all import taxes on solar panels made outside of the U.S. that are crippling the solar industry.

Solar energy companies are cancelling over 2.5 billion dollars’ worth of new large- scale solar projects in the United States as the result of tariffs placed on imported solar panels by the Trump Administration. While most other countries worldwide are looking to expand their solar projects, these import taxes are a sign that Trump is not interested in developing renewable energy, but would rather cling to obsolete and environmentally-damaging fossil fuels like coal and oil.

Solar energy industry leaders and environmentalists had warned President Trump that his proposed tariffs would kill thousands of American jobs and raise prices on solar energy to the point where it would no longer remain competitive. Especially damaging is the fact that efforts to create U.S. solar panel manufacturing jobs have not been able to keep up with the demand and that most panels are still being made overseas.

We must stop this international trade war that is damaging solar power in the U.S. and expand on efforts to increase solar panel manufacturing domestically. Please sign the below petition calling on Trump to lift the tariffs on imported solar panels.

I am writing to demand that you stop imposing unnecessary tariffs on imported solar panels. Your trade policy is harmful to both the American economy and the environment, as shown by the over 2.5 billion dollars’ worth of canceled solar projects this year alone. Before these taxes went into effect, solar was posed to become one of the fastest-growing sectors, and could have resulted in thousands of new jobs.

The U.S. cannot afford to hold on to obsolete forms of energy like coal and oil. The world is outpacing us with new advances being made in renewable energy, including solar, at a rapid pace. There will be dire consequences for this country—and potentially the world— unless more is done to expand on solar. That is why I am urging you to lift these tariffs and allow this industry to compete on the global stage for the good of all Americans and for future generations to come.