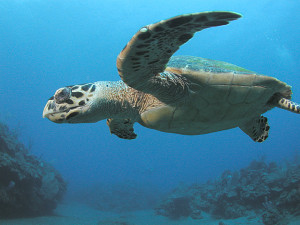 The critically endangered hawksbill turtle has been spotted migrating towards the Coral Sea marine park in Australia. Unfortunately, the Australian government plans to open the park to commercial fishing very soon, which could easily mean the end of the species. Worse, environment minister Josh Frydenberg is defending this decision.

Commercial fishing is one of the leading causes of endangerment and extinction among aquatic wildlife, due to the animals getting snagged on fishing lines or caught in drift nets. It is also very disruptive and destructive to their habitat and feeding habits; krill and other small fish are caught with lines or in nets, and even seaweed and other plants can be disturbed or uprooted this way. The Coral Sea currently serves as a highway between the hawksbill’s nesting beaches and feeding grounds, but if commercial fishing is legally permitted, both the species’ nesting and feeding will be heavily compromised.

The hawskbill turtle has already been hunted to near extinction for its shell. If commercial fishing is allowed to disrupt their habitat and lifestyle, the species could disappear forever. Sign this petition to demand the Coral Sea marine park be kept free of fishing.

Your support of the Australian government’s decision to allow commercial fishing in the Coral Sea marine park is a dangerous one. The Coral Sea currently serves as the highway between the nearly-extinct hawksbill turtles’ nesting beaches and feeding grounds, and the legal allowance of commercial fishing will badly disrupt their habits and daily lives. They will either become snagged on fishing lines or caught in nets.

The hawksbill turtle has already been hunted to near-extinction for their shells, and if their habitat is infringed upon, they will disappear forever. Do not allow commercial fishing in any part of the Coral Sea marine park. You must allow this park to remain a safe space for the hawksbill, along with any other vulnerable aquatic wildlife.