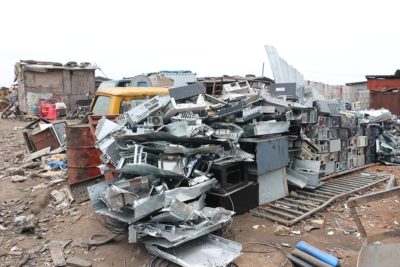 Goal: Crack down on illegal importation of electronic waste from other countries.

Since the Chinese ban on waste importation went into effect, the surrounding countries, especially Thailand, have been under siege by the illegal importation of hazardous electronic waste. Many companies are now taking advantage of China’s initiative to protect its environment by illegally accepting wastes that no longer have an outlet for disposal. This is putting an extreme strain on Thailand’s resources and threatens the health of the environment and Thailand’s citizens.

Electronic waste, or e-waste, comprises nearly any item with an electric cord or battery and contains metallic components that can be separated out and recycled. The waste processing required to do this also exposes workers to the hazardous components of e-waste, which include lead, cadmium, and mercury. Many workers in waste processing plants reportedly have minimal protections from inhaling significant amounts of toxic fumes. Prolonged exposure to these materials can cause cancer and other serious health conditions.

Thai police recently seized many tons of illegally imported e-waste from facilities that were not permitted to import foreign e-waste. Since this e-waste was allegedly imported using a loophole for secondhand appliances, acceptance and processing is essentially unregulated and threatens Thailand’s environment and citizens. This is especially true for employees of waste processors which handle this illicit material.

Thailand has laws in place to limit movement of e-waste across borders, but these are insufficient and at times unenforced. Prime Minister Prayuth Chan-ocha has pledged increased inspections throughout the country to discover this hazardous material, but this only helps after the material has entered the country. Additional regulations and enforcement need to be in place to prevent its importation. Sign the petition for the prime minister to implement and enforce broader regulations to protect Thai citizens from exposure to hazardous e-waste.

China’s ban on the importation of waste, particularly electronic waste, has opened the doors for increased illegal importation by waste processors in neighboring countries such as Thailand. This puts a strain not only on law enforcement officials to seek out and prosecute offenders, but on human health and the environment as well. The processing of electronic waste in order to recover the recyclable components also exposes the toxic components of electronic waste such as lead, cadmium, and mercury. These are known to cause serious health conditions, including cancer. It is critical to the protection of Thailand’s citizens that these materials be regulated to prevent adverse health impacts to workers and potential contamination if these toxins are leaked into the environment.

Ratification of the Basel Convention to prevent importation of hazardous materials has been insufficient in limiting these materials from entering the country. It is not enough to increase inspections in order to discover the material after it has been imported. Regulated processing of hazardous e-waste is critical to the protection of human health and the environment. Please, expand and enforce regulation of this dangerous material.