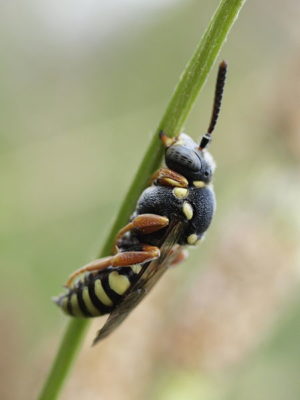 Target: Shannon Phillips, Minister of Environment and Parks and the Minister Responsible for the Climate Change Office in Alberta

The rare macropis cuckoo bee (Epeloides pilosulus) is charting new territory in western Canada. Recently the endangered species appeared in Alberta for the first time in recorded history. With mainstream news of bees primarily revolving around colony collapse and loss of habitat, scientists say this bee lineage represents a new part of the story.

Part of what makes this non-pollinating bee special is its ¨kleptoparasitic¨ adaptations. Specifically, they install their eggs in nests of other pollinating species. Called ¨social parasites¨ due to their ability to take over hives, they also allude to an area’s biological health. Since bees require plants for sustenance, more cuckoos (originally presumed extinct) signify that enough nutrients are supporting hosts. This tells researchers that honey bee populations may finally be recuperating.

The cuckoo bees’ expanded range  marks a major milestone in environmental studies, one conservationists should work diligently to protect. This migration should be vigilantly monitored to better track environmental progress in Alberta. Depending on where the cuckoo bees end up could help the scientific community better understand how bees are prospering. Let public support guide conservation efforts by signing the petition.

For the first time ever, the endangered cuckoo bee appeared at Elk Island National Park in Alberta. Even though these solitary specimens are considered parasitic based on how females lay eggs in pollinating bee hives – they’re indicative of an area’s biological health. These bees are completely reliant on their pollinating hosts for survival, who in turn depend on plants. Therefore, when plant species disappear, so do the cuckoo bees.

Seeing their new progressions signifies that fauna is flourishing in the area. Let’s maintain the momentum by investing in further investigations. One way to improve the likelihood of survival would be by planting ¨swamp candle¨ plants in marshy areas. In addition to colony collapse, the development of wetlands is another major threat to cuckoo bees. Yet more of them means improvements are underway and should be continuously monitored. For an insect assumed to be extinct to suddenly reappear is certainly worthy of further research efforts.