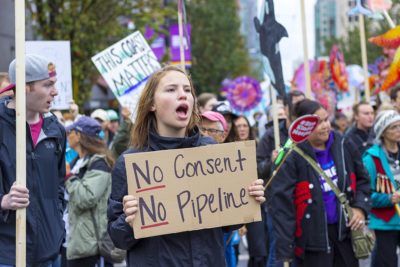 Goal: Do not sell the Trans Mountain Pipeline to the Canadian government, and stop any further expansion of the pipeline, which could have disastrous consequences.

In the face of protests from environmentalists and citizens, Prime Minister Justin Trudeau has announced that Canada will purchase the controversial Trans Mountain Pipeline to ensure its expansion. This expansion is opposed by activists and indigenous groups, and it increases dangers relating to spills and the upswing of petroleum tanker traffic. It will also cost the Canadian government billions of dollars.

The purchase is expected to close in August, when Canada will buy the pipeline from its current owner, Kinder Morgan, for $3.5 billion ($4.5 billion in Canadian dollars). The prime minister says that the expansion of the pipeline is “a vital project in the national interest” and that it will create and protect jobs in Alberta and British Columbia. However, as Premier John Horgan of British Columbia says, “Tens of thousands of B.C. jobs depend on pristine coastal and inland waters. Our environment generates millions in economic activity, from tourism to film and fisheries. It does not matter who owns the pipeline. What matters is defending our coast — and our lands, rivers and streams — from the impact of a dilbit [diluted bitumen] spill.” He says that B.C. will continue to search for legal ways of stopping the pipeline expansion; meanwhile, Alberta’s leaders are in favor of it, pitting the two provinces against each other.

In addition to the costs of purchasing and nationalizing this immense energy enterprise, the Canadian government is also expected to spend billions more on the completion of the expansion itself. The sale is still subject to the discretion of Kinder Morgan and its shareholders. The expansion of this pipeline is hazardous to the environment and to the well-being of Canadian citizens and their livelihoods. Sign below to demand that Kinder Morgan stop the sale of the pipeline and its subsequent expansion.

As many environmental advocates—as well as indigenous groups and concerned citizens—have argued, the expansion of the Trans Mountain Pipeline is dangerous and must be stopped. The political, economic, and environmental hazards it poses are too costly and must not be ignored.

Your company has the opportunity to make an important, positive impact on the future of our continent. The expansion of this pipeline could cost many people their jobs, divides two Canadian provinces, and will cost their governments billions. Perhaps the biggest threat it poses is to the environment, where the risk of an oil spill could be catastrophic. As Premier John Horgan said, “It does not matter who owns the pipeline. What matters is defending our coast — and our lands, rivers and streams — from the impact of a dilbit [diluted bitumen] spill.” This is true not only of British Columbia, but of our earth as a whole. I urge you not to sell the pipeline, and to protect our future: help ensure that an expansion does not take place.