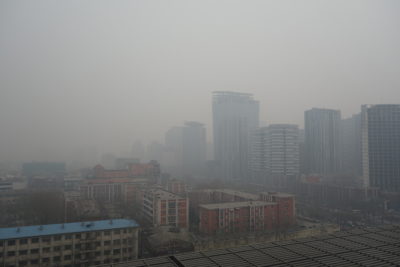 Despite attempts to limit emissions from factories, especially the steel industry, air pollution has continued to increase in industrial areas of China. Concentrations of particulate matter are on average more than double the recommended limits for exposure and at times exceed greater than ten times these amounts, leading to serious public health implications.

Reports on emissions from January to April of this year have indicated that even with limitations on manufacturing during winter months, emissions have continued to increase. The World Health Organization’s recommended limit on particulate matter less than 2.5 microns (PM 2.5) is 25 micrograms per cubic meter for 24 hours of exposure; industrial provinces in China are experiencing average levels of 55 to 64 micrograms per cubic meter. Any successful reductions in particulate matter are often counteracted by weather events, such as sandstorms and conditions which promote smog formation. Particulate matter emissions can increase the likelihood of developing lung and heart conditions and exacerbate pre-existing conditions such as asthma, especially in vulnerable populations such as children and the elderly.

Limitations on industries are put in place yet emissions levels continue to rise. Steel production reached its highest level in the past four years and will likely continue, with no end in sight for smog, particulate matter emissions, and the associated adverse health impacts. Only certain pollution levels will trigger reductions in activities, despite these levels already being above those recommended for exposure. Sign the petition to encourage Chinese officials to enact stricter emissions regulations and implement better control technologies, especially for industrial areas suffering the severe health impacts.

Concentrations of particulate matter were on average more than double the limits for prolonged exposure in the first four months of this year. PM 2.5 concentrations in the air ranged from 55 to 64 micrograms per cubic meter in your industrial provinces compared to 25 micrograms per cubic meter recommended by the WHO based on the health impacts related to this pollution. Weather events such as sandstorms, or conditions which promote smog formation, can increase these levels even higher, even as stricter emissions standards are enacted for industries.

As steel demand and production increases, so too will particulate matter emissions. This will result in adverse health impacts to China’s populations, especially in provinces with significant industry. It is not enough to pledge to reduce pollutant emissions in a graduated manner, especially with the extreme weather events seen in these areas which only exacerbate particulate matter concentrations in the air.

As your industries thrive, your citizens experience increased pollution and its health effects. Even as levels continue to stay above concentrations recommended for exposure, only cases of extreme pollution trigger limitations on industrial production or allow citizens to stay indoors and away from work. Please, don’t allow your population to continue to suffer from increased asthma, respiratory conditions, and heart and lung diseases. Reduce particulate air emissions to the allowable recommended levels for health by requiring stricter pollution controls on factories.