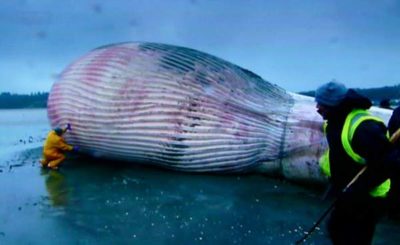 Goal: Switch to non-lethal survey methods to prevent the senseless killing of whales.

A report has revealed that during the annual whale hunt in Japan last summer, 120 pregnant whales were killed. In total 333 minke whales were caught and killed during a 12-week period. Of those 333, 128 were female and 122 of them were pregnant.

The numbers of whales killed in Japan last year were recently revealed in a technical report submitted to the International Whaling Commission. Members of the Institute of Cetacean Research, an agency involved with Japan’s fisheries ministry, wrote the report. Conservationist groups have met the numbers with shock.

Alexia Wellbelove of the Humane Society International said in a statement: “It is further demonstration, if needed, of the truly gruesome and unnecessary nature of whaling operations, especially when non-lethal surveys have been shown to be sufficient for scientific needs.”

Sign this petition to urge the Prime Minister of Japan to commit to non-lethal survey methods to prevent the senseless killing of whales.

In a recent report, it was made public knowledge that Japan killed 333 minke whales last season. 122 of those killed were pregnant. This senseless killing was rationalized by saying that the whale slaughter was necessary for scientific surveys. However, many nations are conducting surveys on whales without killing the specimen.

I urge you to switch to non-lethal survey methods so that the senseless killing of whales at Japanese hands will come to an end.