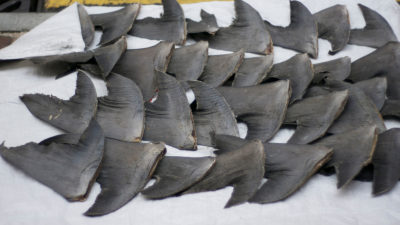 Hong Kong officials recently came across an over one-ton cargo shipment of illegal shark fins, some of which were discovered to be from endangered whale sharks, the world’s largest species of fish. Unfortunately, this is only the latest such incident of endangered shark fins entering the Chinese territory without a permit, and many fear it is a sign of overall lax regulation and enforcement.

Shark finning by its very nature is a cruel and inhumane practice that involves slicing off the dorsal fins from still-living sharks and tossing the rest of the injured animal overboard to die a slow and painful death. Because shark fins are considered a delicacy in many countries, millions of sharks die this way each year to fuel this lucrative trade.

Hong Kong must stop fueling the shark fin trade that is putting so much of this species at risk of extinction. For too long these animals have died to satisfy human greed. Sign this petition to demand that Hong Kong end all shark fin imports.

Recently, a cargo shipment from Singapore Airlines that arrived in Hong Kong was found to contain over a ton of illegal shark fins, including those from endangered whale sharks. This is only the most recent case of illegal shark fin smuggling in your territory, as evidenced by Sea Shepherd’s investigations last year that found that this practice is far too common. It is time that Hong Kong stop its support of this trade that is putting so many shark species at risk of extinction.

While eating shark fin soup is considered a status symbol, the process of shark finning is cruel and wasteful, and results in millions of maimed sharks slowly bleeding to death in the ocean, just to satisfy human greed. As the world’s largest importer of shark fins, Hong Kong is allowing this trade to thrive while over a quarter of the world’s shark species face possible extinction. We demand that you put an end to this wanton killing. Please place an immediate ban on all shark fin imports and severely punish those found guilty of smuggling fins into your region illegally.