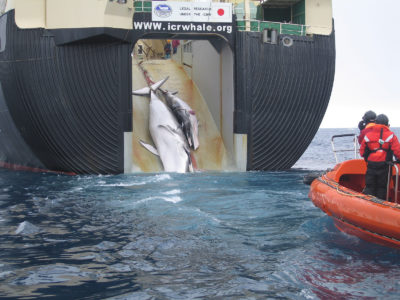 Japan has reportedly killed over one hundred pregnant whales, and slaughtered an additional one hundred juvenile whales during its annual whaling activities in the Antarctic. This hunt continues despite international condemnation and the illegality of killing members of these protected species. We must demand that this nation be held accountable for murdering these innocent creatures.

Japanese whaling fleets reportedly killed 333 minke whales in the Southern Ocean of Antarctica. Of these, roughly a third were immature whales and an estimated 120 were pregnant females, or 63 percent of the female whales captured. In apparent disregard for international conservation law, many of these whales were found to have been hunted in waters designated as marine wildlife sanctuaries.

Japan can no longer hide behind the excuse that these killings are done for scientific purposes, especially when much of the meat ends up in supermarkets and upper class restaurants. This so-called ‘biological sampling’ is harmful to whale populations and to the marine ecosystem as a whole. Sign the petition below and urge the United Nations to demand that Japan be held accountable for violating international law with these cruel and unnecessary hunts.

I am writing to express my outrage that Japanese whaling fleets continue to prowl the Antarctic ocean each summer, barbarically harpooning protected species of whales with impunity. Despite strict international laws regarding commercial activity in Antarctic whale sanctuaries, whaling vessels allegedly butchered over one hundred pregnant minke whales and an additional one hundred juveniles, with much of the meat destined for supermarkets and restaurants.

Although Japan claims that these actions are carried out in the name of ‘scientific research’, there is little evidence that any real research is being done, outside of twelve appointed on-board researchers tasked with weighing the organs and inspecting the stomach contents of slaughtered whales. This is nothing more than a thinly veiled excuse to continue commercial whaling, and it is time that the international community demand that it be brought to an end. I urge you to work with the International Court of Justice to ensure that Japan is held accountable for flagrantly violating international law.