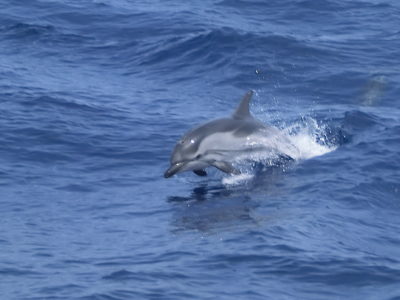 Target: Marina Argyrou, Director of the Department of Fisheries and Marine Research, Cyprus

Goal: Enact restrictions on fishing to discontinue the threat to dolphins’ food supply.

Overfishing around Cyprus has led to significantly reduced fish populations in the area, leading dolphins to take drastic measures for food. Food is so scarce that dolphins have been breaking open fishing nets to steal fish. The dolphins can become trapped in the nets or ingest harmful plastics while trying to access food, both of which are very dangerous but have become necessary risks to take for their survival.

Fish populations in the area have been declining for some time now, since there are no quantity restrictions for licensed fishermen. Fishermen cast more nets in order to bring in sufficient catches, which further exacerbates already dwindling fish stocks. These fishermen also face higher costs from the additional nets and repairs to nets that have been broken into by dolphins seeking the same scarce fish.

There are currently no limits in place on where fishermen can fish or how many fish they can catch. It is critical that quotas and restricted zones are put in place in order to replenish fish populations, which will aid not only the dolphins but the fishermen causing the issue in the first place. Little is known about the dolphin populations around Cyprus, so any tiny change in their food source or population could have potentially significant impacts on the dolphins. Sign the petition to encourage the Cyprus Department of Fisheries and Marine Research to implement sustainable fishing practices and help end food scarcity for the dolphins.

Overfishing in Cyprus has led to decreased fish stocks, which threaten the dolphin populations who rely on the fish for food. Desperate dolphins have taken to destroying fishing nets to steal caught fish. This leads to high prices for fishermen, which leads to more fishing and further exacerbates the problem.

These protected dolphins face significant risks from the impacts of overfishing on the dolphins’ food sources. Restrictions on fishing should be implemented, including quotas and no-fishing areas. This will limit overfishing and help fish populations stabilize or even increase. Please, institute efforts to replenish fish stocks and protect the dolphins from the disastrous implications of overfishing.