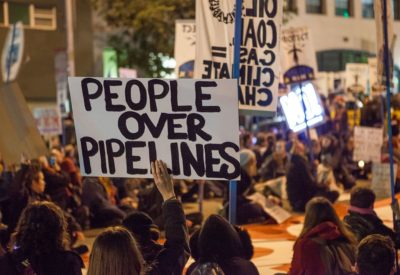 Goal: Don’t build pipeline that would threaten the Puget Sound waterway with pollution.

Protesters took to the streets and the seas to make a stand against Kinder Morgan’s plan to expand their Canadian pipeline from Alberta to British Columbia.  The pipeline would end at the Canadian border, but the proximity to Seattle will create a litany of problems for the Puget Sound and surrounding communities. Activists in kayaks recently made a demonstration by kayaking to the Kinder Morgan dock in the Puget Sound, blocking their traffic from leaving or entering the facility.

Seattle activists are taking to the streets because they say the pipeline will endanger the waterways they hold pure. The pipeline’s mere existence is enough to raise protest.  Kinder Morgan has a long reputation of building pipelines protested by the public and this one comes after we’ve seen a number of spills in the last couple years by pipelines. Stand on the right side of history and demand we put an end to this pipeline immediately.

Your company is proposing a pipeline that may have disastrous consequences in both Canada and America. Please know that you are the gatekeeper to an incredibly important safety issue. We need to keep our waterways safe from pollutants and pipelines, alike. We have seen the people of Standing Rock fight for their lives to protect sacred water sources and right now we have Seattle citizens doing the exact same to protest against a pipeline that’s not even in their city.

It is time to listen to your citizens and put an end to this environmental disaster of a pipeline. Let’s not break fresh ground on something that will bring pollution to both water and landscape. Do the right thing for the people of British Columbia and the surrounding areas and keep this pipeline from moving any further.