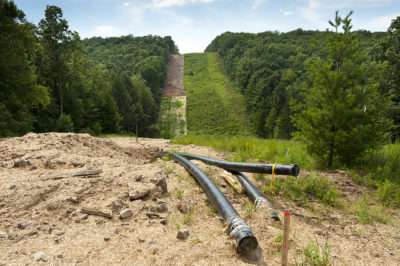 Construction along an aging natural gas pipeline route, including the addition of two new connecting pipelines, has stirred controversy due to suspected engineering issues that resulted in numerous sinkholes opening up earlier this year. Pipeline owner Sunoco Pipeline LP want to extend and expand the Mariner East Pipeline that currently runs through several communities in Chester County, Pennsylvania, but administrative judges at the Pennsylvania Public Utility Commission (PUC) have temporarily halted its progress due to these and other environmental concerns.

Sunoco Pipeline LP wants to expand the pipelines and add additional routes so that more of the highly profitable natural gas liquids from the nearby Marcellus and Utica shales can be delivered to terminals where they can then be shipped overseas. Yet regulators say that the current construction efforts have been done with little care, and the potential for environmental disaster beyond the already damaging sinkholes is high.

This pipeline has had a long and troubling history of spills and water contamination ever since its original construction in the 1930s. Any further construction on this route will likely jeopardize the environment and public safety. Sign the petition below to demand that Pennsylvania regulators permanently shut down this dangerous pipeline expansion project.

I am writing to urge you to put a permanent halt to all further construction along the Mariner East pipeline and to deny future building permits from Sunoco Pipeline LP to extend and expand this dangerous and aging section of Pennsylvania’s infrastructure. This company cannot resume construction without the approval of your commission, so it is vital that you intervene on behalf of the citizens and wildlife that could be impacted by this risky venture that has already caused numerous sinkholes to appear in townships in Chester County.

I ask that you stop allowing Sunoco to jeopardize the safety of Pennsylvanians simply so they can make a profit. Please listen to the concerns of residents and environmental experts alike and shut down this project once and for all.