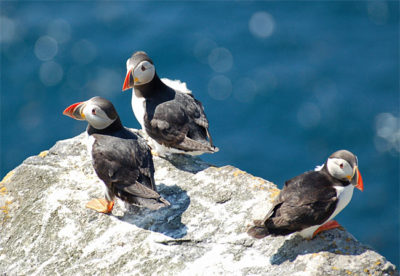 Britain’s puffins are in peril, with their numbers seeing a dramatic drop within the last five years. Less than 20,000 breeding pairs remain overall. This may seem like a large number, but for a species as plentiful as the puffin, it is a shocking reduction. If their numbers continue to drop, the entire species may disappear within a few short years. Farne Island’s population has taken the biggest hit with their 42 percent drop, but other islands are in just as bad of shape.

We cannot allow this to happen. These wonderful birds are a very important species, not only to British heritage, but to the ecosystem. They help control fish populations, and a major absence of any species impacts the environment overall. The disappearance of these birds is largely due to climate change, which despite our greatest efforts continues to threaten the overall condition of Earth and its wildlife.

Puffins need to be protected before they disappear completely. These iconic and wonderful birds deserve better than to lose their homes and their lives. Sign this petition to ensure these birds can rebuild their numbers and live on.

Britain’s puffin population has dropped drastically within the past five years, particularly on Farne Island, which has seen a 42 percent loss. The birds are dying out due to habitat loss and climate change, with breeding pairs coming in at less than 20,000. This is a frighteningly small number for a once plentiful species.

You must tighten protection laws for these birds and strengthen the United Kingdom’s fight against climate change. These birds are too important to British heritage and the ecosystem to allow them to disappear forever. They have been listed as “vulnerable,” but that may not be enough within a year’s time. Despite all efforts to protect the birds and stop climate change, the situation is becoming more and more grim; the puffin may die out completely in a few short years. The species’ future depends on all of our efforts.