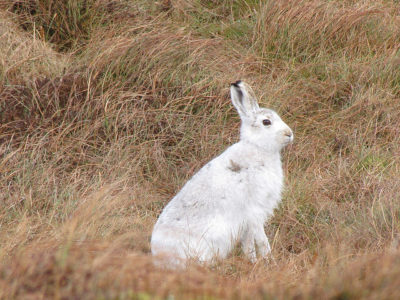 Goal: End the legal cull of mountain hares that has allowed sport hunters to kill thousands of animals with little oversight.

Scotland’s mountain hares could be in danger of extinction if estate owners and sport hunters are allowed to continue to kill them by the thousands. Recent reports reveal that over 38,000 hares have died in one year alone, largely on sporting estates. If this practice continues unchecked, it is likely that the time will come when there are no more hares left on the Scottish moors.

Mountain hares, also known as blue hares, are uniquely adapted to the cold climate and harsh terrain of Scotland’s northern reaches. They are known for their striking white winter coats, making them both one of the highlands’ most iconic species and a favored target among sport hunters. Yet the current rate of slaughter may be unsustainable, with as many as 4,000 hares killed at one estate alone, according to recently revealed data.

The Scottish government must intervene and lift the current planned cull that has allowed these hunts to occur in the first place. Sign this petition to urge Scottish Natural Heritage to end this cull and to enforce strict limits on hunting this unique species.

The legal sport hunting of mountain hares has resulted in the staggering reported loss of over 38,000 animals in just one year. These hares are an iconic highland species that should not be allowed to face extinction just so hunters can skin them and leave them to rot on the moors. Unless the current cull is lifted, there is almost nothing to prevent estate owners and other sport hunters from driving these animals to extinction.

Your own governing body concluded recently that the mountain hares’ population may now be in “unfavourable status.” Despite your recommendations that the Scottish government push for “voluntary restraint” among hunters, it appears that these guidelines have fallen on deaf ears. That is why we are urging you to call for an immediate end to the cull, and to ensure that strict limits are enforced on hunting these hares before it is too late.