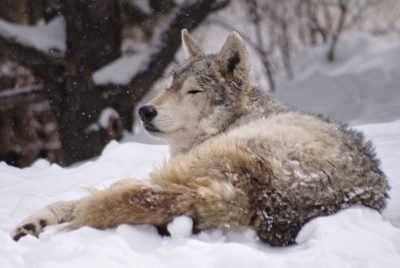 In yet another assault on Alaskan wildlife, the National Park Service has proposed new guidelines that will leave bears and other large wildlife vulnerable to hunters looking for nothing more than a trophy. The dictate, under the guise of aligning federal standards with state standards, gives an additional win to trophy hunters at the expense of wildlife: a long-running and frequent goal of this administration.

This latest affront reverses protections put forth by the Obama administration that banned cruel hunting methods used on federally owned lands. Among the previously restricted and possibly now sanctioned activities are killing young animals such as bear cubs and wolf pups while they sleep in their dens, using food and spotlights to draw out unsuspecting prey, and making use of motorboats in the easy slaughter of marine wildlife. Hunters will now also be allowed to use other animals like dogs as weapons against Alaska’s wildlife.

If enacted, these newly enshrined inhumane standards will leave all wildlife within the 37,000 square miles that comprise Alaska’s national preserves at the mercy of trophy hunters like Interior Secretary Ryan Zinke. The Interior Secretary, whose department oversees that National Park Service, recently held meetings with his board of advisers on wildlife conservation…an advisory board that happens to be packed with known big game hunters.

The public, in turn, has roughly 60 days to ‘advise’ the National Park Service on this critical proposed change as well. Sign the petition below to give voice to Alaska’s increasingly under-siege wildlife population.

The National Park Service is entrusted with a sacred duty: preserving the history and the legacy of our nation’s most cherished landmarks and natural wonders. As the person given directorial authority over this agency, you in turn have a responsibility and a high duty that goes beyond politics or affiliations.

Recently, Alaska has become ground zero in a fight for and against America’s wildlife. The proposed eradication of protections for wildlife on federal preserves feels like less of a move to align federal and state guidelines and more of an effort to appease certain powerful trophy hunters. If these new guidelines come to pass, bears, wolves, and so many other living beings ingrained in Alaska’s rich ecological history will fall to the manipulative and cruel tactics of individuals who eradicate them for profit and prestige.

Please prove your skeptics wrong and fight for the lands and the inhabitants you pledged to protect. Do not bargain Alaska’s wildlife to those who do them harm.