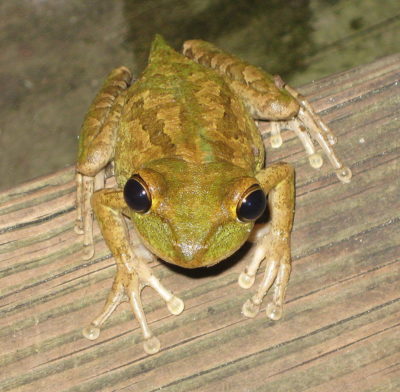 Invasive Cuban treefrogs, once limited to Florida, have now spread into southern Louisiana. This invasive species has established a population that threatens native treefrog species and the entire food web.

Cuban treefrogs are native to Cuba, the Bahamas, and the Cayman Islands, but due to trade and travel have established invasive populations in Florida and some U.S. territories. Populations in Florida have been established since approximately the 1950s, but had yet to move outside this state. Researchers with the U.S. Geological Survey (USGS) recently discovered the first established population of Cuban treefrogs in the continental U.S. outside of Florida. This population was found at the Audubon Zoo in Louisiana, over 430 miles from nearest known population of this invasive species. Cuban treefrogs displace or eat native treefrog species and cause a general nuisance to homeowners, including laying eggs in birdbaths and landscaping, secreting a noxious substance from their skin, and even causing power outages from seeking refuge in utility boxes. The extent of their damage to ecosystems by displacing native treefrogs could be extensive, since native treefrogs are both predator and prey in the food chain. In addition, the location of the newly discovered invasive population is in close proximity to the Barataria Preserve of the Jean Lafitte National Historical Park and Preserve, which is a large tract of public land that if invaded could provide a corridor for this species to easily invade many other areas and ecosystems.

These invasive treefrogs are displacing native species and could cause irreparable harm to the ecosystems. Their continued survival in their most recently discovered location could result in further invasion into nearby nature preserves, using these larger tracts of land to access and damage even more ecosystems. Sign the petition for the Louisiana Department of Environmental Quality to fund research into the impacts of these invasive species and methods to safely remove them from their environment and prevent their spread into other areas.

The recent discovery of Cuban treefrogs in Louisiana is cause for concern for Louisiana’s native treefrog species. After decades of maintaining only populations in Florida, this invasive species has established itself elsewhere in the continental U.S. for the first time, over 430 miles from the closest known Cuban treefrog population.

This invasive species displaces native treefrogs and causes nuisances to homeowners. The presence of Cuban treefrogs could cause significant impacts to the ecosystem, since the native treefrogs they displace act as prey and predator in the food chain and impacts to them could cause impacts the whole system. Their proximity to the Barataria Preserve of the Jean Lafitte National Historical Park and Preserve is also concerning. Once these invasive treefrogs establish themselves in this large protected area, they will be able to easily disrupt many more ecosystems.

It is imperative that these treefrogs be limited in their establishment on the continental U.S. Please fund research to determine the impacts of the Cuban treefrogs on our ecosystems and limit their invasion and displacement of crucial native treefrog species.