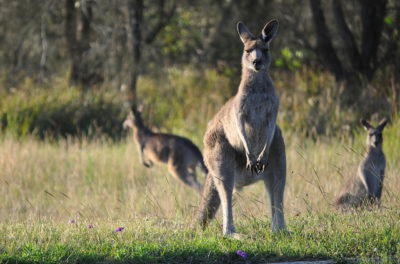 Australian officials have approved the culling of kangaroos in the Australian Capital Territory for yet another year. For the next three months, thousands of the native marsupials will be massacred in an attempt to control their population. Kangaroos are an essential part of Australia’s natural ecosystem and help reduce the risk of damaging brush fires, and therefore must be protected against this needless form of cruelty.

As part of the annual cull, unlicensed hunters are allowed to participate and kill virtually any animals that they find in a variety of inhumane ways, including the clubbing of young kangaroos and their mothers. Additionally, those opposing the cull have faced prosecution, making it difficult for animal rights groups to rally against the ongoing cruelty.

The Australian government must listen to the voices of those who stand against this cull that lacks any scientific basis and results in the suffering and death of thousands of animals. Sign below to demand that officials seek non lethal alternatives to controlling the kangaroo population.

Each year since 2009, thousands of kangaroos have been ruthlessly killed each year in the Australian Capital Territory as part of a misguided attempt to control their population. While kangaroos are prolific by nature, they are an integral part of the ecosystem and help maintain Australia’s biodiversity while reducing the risk of damaging fires by clearing away excessive brush.

Unless government officials intervene, thousands of kangaroos will be killed in a host of inhumane and cruel ways, including the brutal clubbing of young joeys and their mothers. These native creatures should be allowed to thrive as they have for millennia, not killed in mass numbers to make way for livestock or other human endeavors. If population control is indeed necessary, we urge you to find humane, non lethal alternatives that do not cause harm to one of Australia’s most iconic species.