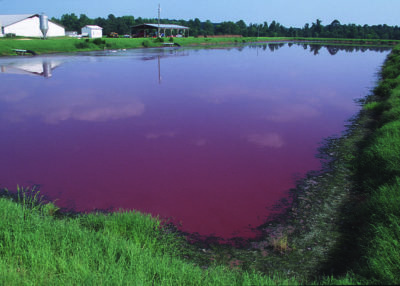 Untreated pig manure at factory-scale hog operations pose a severe threat to the environment and human health. This was the conclusion reached by a federal jury that awarded $50 million in damages to a handful of people living in close proximity to one such farm found guilty of allowing animal waste to contaminate the surrounding area.

The farm at the center of the recent case is Kinlaw Farm, which is owned by Smithfield, a major player in the pork industry. Like many other hog farms in North Carolina, the farm has several large open-air cesspools, often referred to as ‘lagoons’ where manure produced by the thousands of hogs kept on the property is dumped. Bacteria and toxic gases from these pools can enter the waterway and contribute to air pollution, which can result in major health risks for humans and animals alike.

People and wildlife should not be subjected to this noxious threat that the pork industry and government alike are largely ignoring. Sign the petition below to urge the governor of North Carolina, one of the largest pork-producing states, to tighten waste treatment regulations so that this industry will finally be forced to clean up its act.

Pig waste from major hog farms in your state is causing harm to the environment and people living in rural areas. Most of these people live in poverty, and with nowhere else to go, they have been forced to breathe in noxious gases like ammonia and hydrogen sulfide for years, which can cause a host of severe medical issues.

Untreated pig manure left to sit in open-air cesspools is a serious environmental and human rights issue in your state that must be addressed. Despite intensive lobbying by the pork industry to fight regulations, something must be done to combat this threat to your state’s waterways and overall air quality. That is why we, the undersigned, urge you to put the health and well-being of all North Carolinians first and call for new legislation that will hold hog farm operators responsible for responsibly treating the vast quantities of waste their livestock produce.