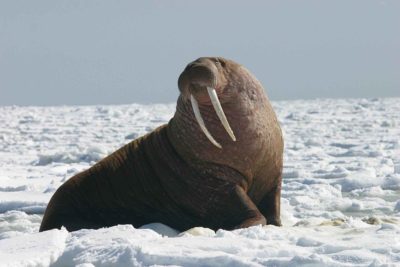 Roughly 200 walruses have crowded the beach of a small Alaska village to forage for food. This village seems to be the optimal foraging area for the creatures, who feed on the mollusks living on the nearby ocean. Walruses can spend as many as seven months seeking food, especially the bull walruses who provide for their families.

Since 2017, the walrus has been especially vulnerable due to the Trump administration’s refusal to put them on the endangered list. The species is indeed endangered, with the number of foraging walruses having dropped from 10,000 to as little as 2,000 since the 1980s. Additionally, walruses are very easily scared off by any disturbances; noisy approaches by people can startle them into stampedes that kill other wildlife, and continued disturbances by beachgoers or the noises associated with human activity can drive them away from the area.

We must ensure that these walruses are strongly protected during their stay on this beach, and during any subsequent returns, especially after they have been denied legal protection as an endangered species. Sign this petition to protect the walruses and help grant them an easy time during their forages.

A large group of walruses has taken up residence on the beach near Port Heiden, where they will spend the next several months foraging for food. The species has been endangered for years, and is especially vulnerable now due to the Trump administration’s refusal to put them on the endangered list. They lack government protection, and can easily be scared away from their foraging and resting spots by excessive noise and crowds.

You must ensure that these walruses are protected during their stay here, and during any subsequent returns. Their numbers have dropped drastically since the 1980s, and they are in need of extra protection due to being left off the endangered list. Please ensure that the village and surrounding area will accommodate these animals and allow them to forage safely and peacefully.