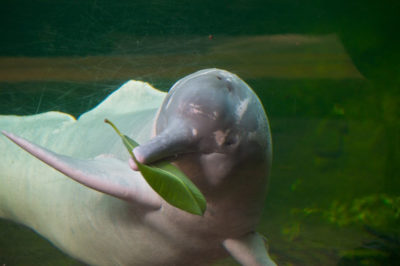 Amazon river dolphins are experiencing a significant population decline due to hunting of these beautiful creatures for use as bait in commercial fishing. This cruel practice is causing the loss of these animals, much like the freshwater dolphins of China before them, who are now functionally extinct due to human activities. If these practices continue and the dolphins remain unprotected, soon there will be no freshwater dolphins left.

Two species of freshwater dolphin live in the Amazon River Basin: the boto and the tucuxi. Scientists in Brazil recently examined dolphin population surveys over the past 22 years and discovered that both species are approximately halving in population every ten years. Yet the International Union Conservation of Nature lists their conservation status as “Data Deficient.” If these scientists’ latest findings were taken into account, however, the conservation status for both species would likely be “Critically Endangered.” Scientists have examined every possibility for the cause of the dolphins’ decline, including commercial fishing, reduced food sources, river water quality impacts from mining or industry, and subsistence hunting. None of these appear to have caused this significant population loss, with the exception of commercial hunting.

The Brazilian government instituted a temporary ban on hunting these dolphins for use as bait, but this appears to be largely disregarded. Even with a hunting ban in place, these populations continue to decline due to illegal activities and their naturally slow reproduction rate. Females bear calves only once every four to five years, making population revival slow and difficult. Sign the petition to urge the Brazilian government to extend the existing dolphin hunting ban indefinitely and actually enforce it, before the Amazon river dolphins disappear as the Chinese river dolphins did.

Researchers have estimated the dolphins’ population to be halving every ten years based on a recent study of surveys taken over the past 22 years. Despite a plethora of proof to the contrary, the International Union Conservation of Nature conservation status of the Amazon river dolphins remains “Data Deficient.” Human activities have already caused the Chinese river dolphins to become functionally extinct, and the Amazon river dolphin is not far behind. Scientist believe if the recent study were taken into account, that these dolphins would be listed as “Critically Endangered” and require far more protection than a temporary hunting ban.

Acknowledging the detrimental effects of commercial hunting by instituting the temporary ban on commercial hunting is an important first step in righting this wrong. However, this ban appears to be ineffective and is only temporary. The dolphin hunting ban needs to be vehemently enforced and indefinitely extended before these beautiful creatures disappear completely.