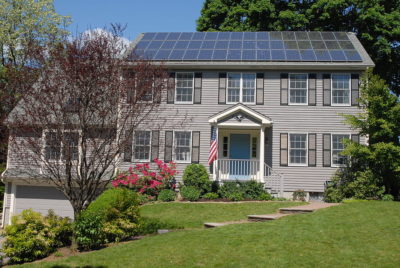 Goal: Follow in California’s footsteps and require that new homes be built with solar panels to protect our environment nationwide.

Greenhouse gas emissions are a major and dangerous contributor to global warming, but California has approved a proposal to great reduce greenhouse gases by requiring that all new houses constructed beginning in 2020 be built with solar panels. According to an EPA report on the consequences of climate change in California, global warming is tied to critical issues including the death of trees, retreating glaciers and warming waters, and catastrophic droughts and wildfires. However, the report also noted that the state’s “pioneering policies” have cut greenhouse gas emissions in spite of a growing population, which provides hope.

California will be the first state with this type of requirement, which has been passed by the California Energy Commission and now awaits approval from the Building Standards Commission. Although construction costs will be higher, this will be offset by lower utility costs and the significant benefits to the environment. A report commissioned by the state found that this measure will ultimately be cost effective, and is the only effective way of ensuring that homes produce as much energy as they use. Sign below to demand that our federal government do its duty to protect the environment and enact the same requirements for solar energy in newly built homes.

The EPA has released reports that show the ties between global warming and environmental catastrophes, and has pointed out that California’s “pioneering policies” and reduction in greenhouse gas emissions despite a growing population provide hope for the future. One such policy is California’s recently approved proposal to require solar panels on all new houses built starting in 2020. As the leader of the EPA, it is your responsibility to protect and preserve our environment for future generations. Following California’s lead in these measures are the best way to do that.

Although solar panels will increase the price of building, those costs are projected to be balanced out by lower utility costs. Reports have determined that these measures are cost effective, and provide the only practical long-term solution to ensuring that homes produce as much energy as they deplete. These new measures do provide exceptions for structures that don’t get much sunlight, and are a huge step in the right direction when it comes to cleaner energy and hopefully combatting the devastating natural disasters that are shown to be tied to global warming. I urge you to preserve our environment and to emulate California’s example by requiring solar panels in the construction of new homes nationwide.