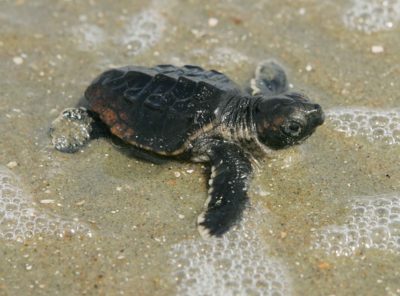 Goal: Expand microbead ban in Florida to protect species that live along the Gulf of Mexico, such as the loggerhead turtle.

Unseen pollution on the beaches along the Gulf of Mexico endangers wildlife such as the loggerhead turtle. Tiny bits of plastic pollution called microplastics are barely noticeable to humans but can significantly impact species that use these beaches, such as loggerhead turtles, who lay their eggs there. Florida needs to reduce this plastic pollution through enforcement of existing laws and the expansion of the Obama administration’s microbead ban in order to protect this wildlife.

Microplastic pollution, made of bits of plastic smaller than 5 mm, is caused by the use of tiny bits of plastic called microbeads in consumer products such as exfoliants and wash-off cosmetics. President Obama banned microbeads by executive order in 2015, which went into effect mid-2017, but this has not been enough. Microbeads can still be used in some products such as leave-on cosmetics and detergents and still find their way into the ocean and onto the beaches. These plastics are nearly impossible to remove from the wastewater stream through conventional treatment. This pollution can impact wildlife directly by accidental digestion or more insidiously by secondary impacts such as through the deposition of these nearly invisible plastics on beaches.

Loggerhead turtles lay eggs in the sands along the Gulf of Mexico and are significantly impacted by this microplastic pollution. Gender determination in loggerhead turtles is largely dependent on the temperature of the sand in which they develop. Plastic holds heat and causes greater temperature increases in the sand compared to moderate fluctuations in air temperature. Scientists have discovered in some cases of extreme plastic pollution that 99% of turtle hatchlings are female. This heat retention is causing dangerous impacts to the turtle populations and their abilities to reproduce, and scientists simply do not yet know the extent of these impacts.

The microbead ban has not tangibly reduced microplastics pollution. Several more loggerhead turtle breeding seasons could take place before the effects of the ban are seen, and even then more microbeads will have entered the environment through their continued use due to loopholes in the ban. By that time, significant changes could occur in the loggerhead turtle populations. Florida needs to expand this ban to cover all products with microbeads before it is too late. Sign the petition to encourage Florida’s governor to take the existing microbead ban further and institute real change to protect this sensitive turtle.

Microplastic pollution is impacting loggerhead turtle populations that use Florida’s beaches to lay their eggs. This pollution is caused by the use of microbeads in consumer products that were not included in the 2015 ban by the Obama administration. This ban should be expanded to include all microbeads, especially in areas where impacts to sensitive populations could occur, such as along the Gulf of Mexico.

Loggerhead turtles who lay their eggs in the sand along these beaches are greatly impacted by microplastic pollution. The microbeads hold heat, unduly increasing the sand temperature compared to changes in ambient temperature. The temperature of the sand impacts the gender determination of the turtles, in some cases resulting in groups of eggs hatching that are nearly 99% female. Scientist do not yet know the extent of the impacts, only that microplastics have been found at every breeding site examined and are the likely culprit of the significant gender skewing in the turtle population. These microbeads are nearly impossible to remove from water using conventional wastewater treatment techniques, so a ban on the use of microbeads in all consumer products is critical to reducing this pollution.

Please, enact a more stringent microbead ban in Florida to include all microbeads. It is crucial to the loggerhead turtles’ survival that they be able to lay their eggs on clean beaches. Don’t wait until it is too late.