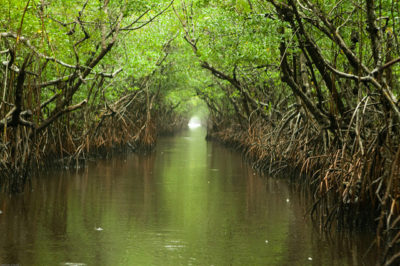 The mangroves that make up a large area of southern Florida, including the renowned Everglades National Park, are making a quick retreat as rising sea levels swallow up more of the coastline each year. Scientists predict that in as little as 30 years, the mangroves will have been pushed back as far as they can go before running into man made obstacles, such as levees.

Sea levels have been on the rise in Florida and other low-lying coastal areas around the world due to climate change. Areas that were once wetlands are increasingly being replaced by open water. This includes the iconic Florida Everglades, one of the state’s most popular natural attractions and home to a vast array of wildlife. If the mangroves disappear, it is likely that many species will go with it—including alligators, crocodiles, manatees and the endangered Florida panther.

While the current outlook for the Everglades seems grim, there are steps that Florida can take to counteract its slow demise. Please sign the petition below to demand that the governor of Florida commit to protecting this treasured ecosystem from destruction through habitat restoration and reducing the state’s carbon emissions.

Researchers have found that Florida’s mangroves are rapidly receding from the coastline due to rising sea levels across the southern section of the state. This includes the so-called ‘sea of grass’ wilderness in the beloved Everglades, which could disappear entirely in as little as 30 years.

Numerous studies have shown a strong link between carbon emissions, such as those from gas or coal, and the global climate change that is behind this phenomenon. Although Florida is not solely responsible for causing this problem, it is imperative that your state government do what it can to reduce fossil fuel consumption and emissions. We, the undersigned, urge you to support cleaner energy alternatives and to work to restore the Everglades and other mangrove habitats so that these natural treasures and their many wild inhabitants have a chance to survive.