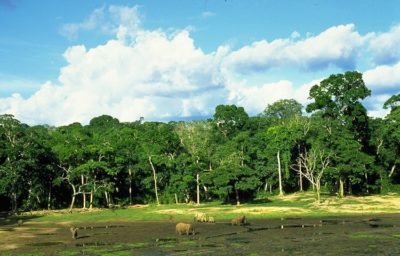 Goal: Save endangered species whose loss could impact us at home.

African forest elephants are a little-known endangered species that require our protection, yet the Trump administration continues to cut funding for environmental programs, including international conservation efforts. We need to encourage Congress to continue funding important conservation programs in the Fiscal Year 2019 budget in order to continue the protection of species with global significance, such as the African forest elephant.

African forest elephants are a critical component of their rainforest habitat of West and Central Africa, which is one of the largest sources of carbon sequestration on the planet. Herd movement allows for the spread of seeds, and the elephants’ digestive systems are a critical component in the germination of these seeds. They literally keep the rainforest growing and continuing to purge the atmosphere of harmful greenhouse gases. These gentle giants also forge paths for other smaller animals to travel through the rainforest for food, shelter, and mating. The loss of the African forest elephant would be an irreplaceable loss to the plants and animals that depend on them for survival. Habitat loss, poaching, and civil unrest have reduced the range of these herds to a quarter of their historical habitat region. It is estimated that fewer than 100,000 African forest elephants remain, resulting in their “Vulnerable” conservation status, which means they face a high risk of extinction in the wild.

These elephants perform a critical function in their habitat and need protection. The rainforests that depend on the African forest elephant for survival are one of the largest sources of carbon sequestration on Earth. The loss of this species would not only have direct impacts on rainforest biodiversity, but major global impacts related to the control of greenhouse gases. Sign the petition to encourage Congress to continue funding international conservation efforts that are of tremendous importance locally and around the world.

I urge you to reject the Trump administration’s proposed cuts to environmental programs, such as international conservation efforts. Protecting endangered species abroad may not seem important, but I assure you that the loss of these species could impact us from across the globe.

The African forest elephant, for instance, is a little-known species of global importance but is endangered by poaching and habitat loss. The rainforests of West and Central Africa that these elephants inhabit are one of the largest sources for carbon sequestration on the planet, and maintenance of these forests is crucial in the control of greenhouse gases in the atmosphere. These elephants play a critical role in the rainforests, by dispersing seeds and aiding in the germination of seeds through their digestive systems. Fewer than 100,000 of these elephants are estimated to remain to continue their important function in this rainforest ecosystem.

I strongly support the funding of international conservation programs. It is important to our environment and our wellbeing, even though the issue may be geographically distant. Please, support these programs by passing the Fiscal Year 2019 budget with the same levels in appropriations as in previous years.