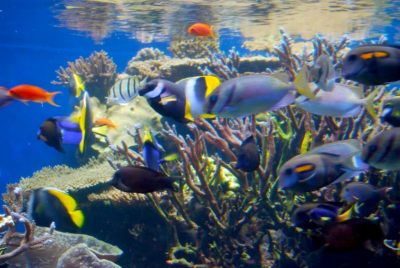 Goal: Protect the rare and endangered coral reefs of Hawaii by banning a dangerous and deadly chemical found in sunscreen.

Sunscreens containing a chemical known to cause harm to the rare coral reefs found off of Hawaii’s coast may soon be banned if the governor signs into law a recently passed bill. This would make Hawaii the first location worldwide to enact such a ban, and it could have potentially far-reaching results for the islands’ sensitive marine ecosystem.

The chemical in question is known as oxybenzone. Studies have shown that this substance degrades living corals’ resiliency against changes, such as those caused by climate change or other forms of environmental stress. Over time, it can contribute to coral death or inhibit the formation of new reefs. The newly passed ban would make it illegal to sell or distribute non-prescription sunscreen containing this harmful chemical, which will prevent this ingredient from ending up in the coastal waters near popular state beaches.

Coral reefs worldwide are in need of our help, and measures such as this ban are a small way we can help with their recovery. Sign this petition to urge Governor David Ige to sign this bill into law immediately to send a message to the rest of the world that reefs are worth protecting.

Hawaii is famous for its many beautiful coral reefs, which are a crucial habitat for many hundreds of species of fish and other marine life. Yet these reefs have been endangered thanks to a common substance found in sunscreen. You now have the chance to protect these reefs by signing into law a new bill banning oxybenzone passed by the Hawaii State Senate.

We, the undersigned, urge you to act immediately to approve this bill, which will be a world-first in banning this harmful substance. Removing oxybenzone from Hawaii’s coastal waters is an important step in ensuring the future of this picturesque, vulnerable ecosystem for years to come.