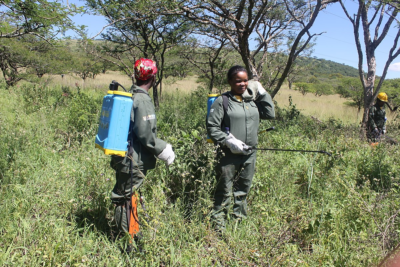 Hundreds of different invasive plant species in South Africa are running rampant. The country’s invasive control program, Working for Water, is one of the most successful in the world, creating local jobs while eliminating established invasive plant species, and yet cannot keep pace. This control program is underfunded and insufficient to stop the growth of so many different invasive species threatening South Africa’s natural resources.

South Africa is one of the most biologically diverse areas in the world, boasting over 9,000 plant species, two-thirds of which cannot be found anywhere else in the world. However, at least one-third of those unique species are now threatened with extinction by invasive plants. Invasive species cover 25 million acres and consume an estimated 1 billion gallons of water annually. Water is scarce as it is in this drought-stricken nation without invasive species consuming more water on average than native plant species. These invasive species also alter the fire regime, which is necessary for the regrowth of native plants, causing hotter fires which threaten not only the native plants by infrastructure as well. They can also change the composition of the soil, compromising the ability of native plants to survive. These species threaten the unique biodiversity of South Africa and the scarce water supply in an area of the world that is already undergoing extreme rationing.

Controlled burns and invasive tree felling have been shown to be effective in controlling invasive plants in certain areas. Prioritization of the most egregious species needs to be implemented. Widespread use of these techniques is needed but cannot be realized without additional funding on a much larger scale if positive impact is to be made, rather than just slowing the invasion. Sign the petition to promote funding for the Working for Water program to continue its good work in the protection of the environment and the creation of South African jobs.

South Africa’s natural resources are being consumed by invasive plant species. Even under the Working for Water program, largely considered to be one of the world’s most successful invasive control programs, South Africa’s biodiversity and water availability are threatened. This program, even in its success, is underfunded and under-prioritized.

South Africa is home to thousands of plant species that are not found anywhere else in the world. Invasive plants threaten the existence of these unique native species by consuming more water on average, changing soil composition, and altering the fire regime for native plant regrowth. The controlled burns and invasive tree felling has been successful in inhibit the growth of established invasive plants but is not nearly enough at its current scale to impact the over 10 million hectares covered by invasive plants. These unwelcome plants consume over 3.3 million cubic meters every year, water that is already scarce. The Working for Water program simply cannot keep up.

President Ramaphosa, please, invest in this important program and implement the broad changes necessary to not only combat the invasion of these unwelcome plants, but beat them back completely. It is vital to South Africa’s water conservation efforts and diverse ecosystems.